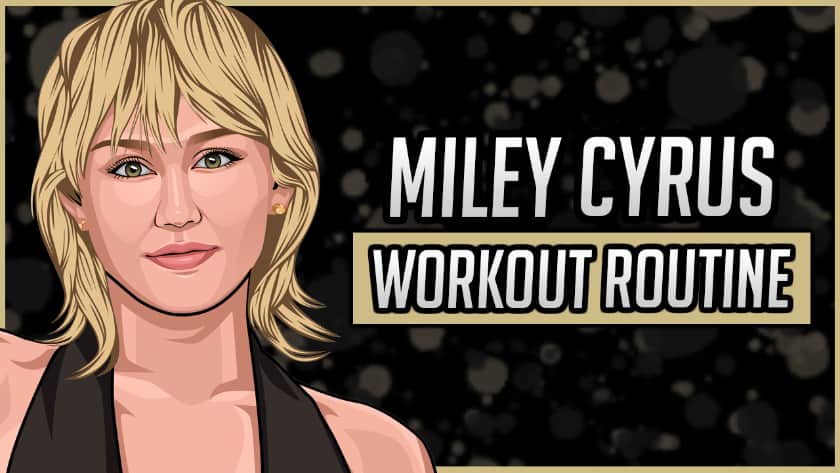 Cyrus is the daughter of the popular country singer Billy Ray Cyrus and she has her breakthrough when she starred in the television series ‘Hanna Montana’.

Today Miley Cyrus is one of the most popular singers in the world and her music has sold millions of copies around the globe.

Miley Cyrus loves yoga and she actually practices two hours a day six days a week. Cyrus’ preferred style of Yoga is Ashtanga which has a focus on cardiovascular fitness and strength.

Cyrus has stated: “The thing about Ashtanga yoga is that sometimes it can be really uninspiring because the teacher will say, ‘Oh, don’t worry that’s just going to take you 10 years, and you’re like ‘Wait, what?” mentioning that mastering Ashtanga poses takes a lot of training.”

Miley Cyrus follows a strict and clean diet and she prefers to eat a lot of vegan food. Her workout regime features a lot of core exercises.

She also likes to perform Pilates and this gives her a toned core and skinny legs. Cyrus refuses to only rely on dancing and singing as a fitness workout.

On Tuesday, Thursday and Saturday, she hits 5 different exercises.

Miley Cyrus is an animal lover and she went vegan in 2014 and has maintained a plant-based diet ever since.

Cyrus avoids meat, dairy, eggs, and fish. She has stated that she has protected herself from diseases by not consuming animal products.

Miley Cyrus has come a long way since she began her career as a teen idol with the Disney Channel ‘Hannah Montana’.

She has been ranked as the 35th on Forbes magazine’s list of ‘Celebrity 100′ and she is one of the richest celebrities of her generation.

Don’t forget to share this article if you’re a huge fan of Miley Cyrus’.

If you enjoyed this routine, check out some of our other female singer workout routines:

What do you think about Miley Cyrus’ workout routine and diet? Leave a comment below.