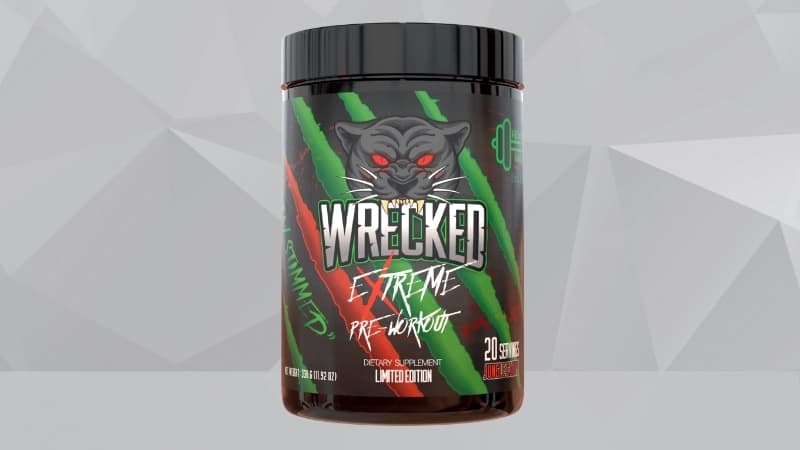 We recently reviewed the Wrecked Pre-Workout, which we absolutely love, and now we’re reviewing the limited edition “Wrecked Extreme”.

“Some of the links in this post are affiliate links. This means if you click on the link and purchase the item, we will get a small commission at no extra cost to you. All opinions remain our own.” Huge Nutrition Wrecked Extreme Limited Edition (20 Servings)
$59.95
Shop Huge Nutrition
We earn a commission if you click this link and make a purchase at no additional cost to you.

There are quite a few changes to the formula for Wrecked Extreme. In this review of the Wrecked Extreme Pre-Workout formula, we’re going to be discussing the following:

Before we discuss the ingredients, prices, and effectiveness of the Wrecked Extreme Pre-Workout, let’s cover some of the important information on the product, such as serving size, servings per container, and container size.

Each Tub of Wrecked Extreme has a net weight of 338g and contains 20 servings of their pre-workout formula. Each serving is 16.9g.

However, you could stack it with something like their Huge BCAA product instead. 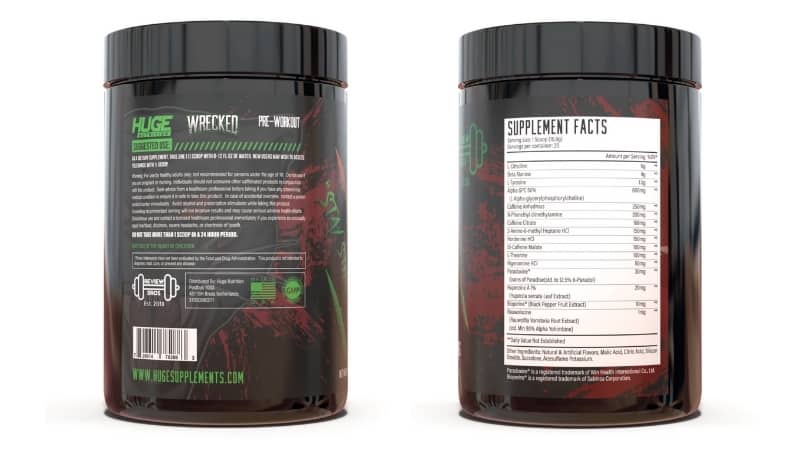 Wrecked Extreme Pre-Workout contains 16 core ingredients, with content totaling up to 16.9g per serving. Let’s take a look at the supplement label, individual ingredients, and their dosages.

What I love most about this edition is how some of the ingredients with fewer studies and research behind them have been removed and replaced with other ingredients known to be very effective.

These ingredients are listed by highest quantity first.

Citrulline helps to increase vasodilation, which helps widen arteries and blood vessels improving blood flow. In your workouts, this can mean a bigger pump and reduced fatigue.

Beta-Alanine is naturally produced in the body, however, people often don’t produce enough required for intense physical exercises. It helps with the production of Carnosine, which itself helps to reduce muscular fatigue.

3000mg-3200mg is a standard dosage, so this new formula adds a nice additional 800mg from the original.

L-Tyrosine is often used as somewhat of a counter-balance to negate the side effects of high caffeine content. It helps balance your mood and may provide a cognitive boost.

1000mg is an ideal dosage, with 1500mg being the top end. This amount is most likely used due to the increased caffeine content with this formula.

Alpha GPC is used for cognitive enhancement and to increase power output. Though it is naturally produced in the body, it’s only produced in small quantities.

The standard dosage normally ranges between 300mg and 600mg, putting Wrecked Extreme right at the top end of this range.

Caffeine is the main ingredient included in all stimulant pre-workout supplements. It’s the main source of energy in such supplements, and 250mg is a very solid dosage. Anything above 300mg of Caffeine Anhydrous in a pre-workout is in my opinion too high and will produce more side effects than anything else.

N-Phenethyl Dimethylamine, otherwise known as Eria Jarensis, is a potent stimulant that may increase concentration and elevate moods. It’s become quite a popular alternative to the banned substance DMAA.

Caffeine Citrate is a quick-acting form of caffeine, with a shorter half-life than the standard Caffeine Anhydrous. The addition of this ingredient means that Wrecked Extreme has 3 caffeine variations covering all bases: quick release, standard, and slow release.

2-Amino-6-methyl Heptane HCL, otherwise known as DMHA, is a highly potent stimulant that companies began using after the ban of DMAA. The two compounds are very similar in nature, however, DMHA is less potent and requires higher dosages to receive the same effects.

Hordenine HCL is another nootropic, that doesn’t have a whole lot of research done on it just yet. From what we’ve seen, effective dosages may start from 20mg.

Di-Caffeine Malate has a higher half-life than Caffeine Anhydrous (5-6 hours vs 3-4 hours). This makes it slow-release caffeine, which can help to reduce fatigue toward the end of workouts.

Rather than ingesting caffeine before your workout, and crashing toward the end, Di-Caffeine Malate helps to negate this.

Higenamine HCL is used for potential fat-burning properties, however, the current research is inconclusive.

Grains of Paradise is relatively new and without conclusive studies, however, it may be beneficial in aiding fat loss and boosting metabolism.

Huperzine A is another ingredient that acts as a cognitive enhancer, and a dosage of 20mg is quite common.

Bioperine has been used in supplements for quite a long time. Put simply, it’s a patented form of black pepper extract and aids the body in the absorption of all the other ingredients a supplement contains.

Anywhere between 5mg and 10mg is a standard dosage.

Rauwolscine has been researched on its ability to inhibit fat burning, whilst increasing overall adrenaline levels.

Since Wrecked Extreme is a limited edition product and most likely won’t be available forever, they have released it with just one flavor, “Jungle Candy”.

The standard Wrecked formula is available in two flavors, “Rainbow Burst” and “Peach Rings”, so it’s nice to see a fresh flavor being used for this edition.

Personally, I’d love to see this flavor released for the original formula, however, this might give the term ‘limited edition’ a little less meaning.

When it comes to pre-workout supplements, there are three main areas where every great pre-workout should excel.

Whenever a pre-workout is reviewed, these 3 things should also be reviewed.

Let’s take a look at the effectiveness of Wrecked Extreme:

Wrecked Extreme has to be one of the strongest pre-workout formulas when it comes to energy and stimulant content. With 250mg of Caffeine Anhydrous, combined with 100mg of Di-Caffeine Malate, 168mg of Caffeine Citrate, and 200mg of DMHA, you’re able to get an insane amount of stimulant in a single serving.

In other words, it hits, and it hits hard.

There are several nootropic/cognitive enhancement ingredients within Wrecked Extreme, which definitely help boost focus in the gym. Alpha GPC, Huperzine A, and Hordenine HCL do the job nicely here.

Lastly, the pump. Whilst the focus for Wrecked Extreme is on energy and focus, the pump is still incredible. A high Citrulline Malate content, coupled with Beta-Alanine, does the job here.

Huge Nutrition Wrecked Extreme Limited Edition (20 Servings)
$59.95
Shop Huge Nutrition
We earn a commission if you click this link and make a purchase at no additional cost to you.

The price of Wrecked Extreme is $59.95 on the Huge Supplements website.

It’s definitely on the expensive side of things, considering the original is $44.95.

However, let’s not forget the fact this is a limited edition, and upon closer look at the ingredients, one of the strongest pre-workout formulas we’ve ever seen.

Where to Buy Wrecked Extreme?

You can buy a tub of Wrecked Extreme on Huge Supplements’ official website for $59.95.

They also sell all their other products on the site and offer various deals for product stacks.

Let’s discuss the advantages and disadvantages of Wrecked Extreme and weigh everything up:

Here are some frequently asked questions many people have on the product:

In our personal opinion, Huge Supplements and Review Bros have built a sensational product with Wrecked Extreme. With its high Caffeine, Citrulline Malate, Alpha GPC, and Beta-Alanine dosages Wrecked Extreme may be one of the strongest and most effective pre-workout on the market.

Q: How Much Caffeine Does Wrecked Extreme Pre-Workout Have?

Wrecked Extreme is manufactured in an FDA-registered facility and has the GMP stamp of approval. It does contain large quantities of caffeine, and it’s important to consult your doctor if you have any questions or concerns about taking a pre-workout supplement or stimulant of any variety.

Q: Where Can I Buy Wrecked Extreme Pre-Workout?

You can buy Wrecked Extreme on the official Huge Supplements website to get the best prices and deals available. It’s important to mention that this is a limited edition release and is time-sensitive. We’re assuming that once they run out of stock on their website they won’t be producing it anymore.

Q: What is the best way to take Wrecked Extreme?

Huge Supplements recommend Taking one scoop of Wrecked Extreme roughly 20 to 30 minutes before working out.

They recommend first-time users start out with half a scoop to assess tolerance.

NOTE: Do NOT take more than one scoop in a 24 hour period.

So, how good is Huge Supplements’ Wrecked Extreme?

Weighing everything up, Wrecked Extreme is quite possibly one of the strongest pre-workout formulas on the market.

The biggest advantage of Wrecked Extreme is the ingredients it uses and its dosages. It features Citrulline Malate, Beta-Alanine, L-Tyrosine, Alpha GPC, and Caffeine in optimal dosages. These are 5 ingredients proven to be effective in improving your energy, pump, and focus in the gym, and they’re not often dosed high enough when it comes to pre-workout supplements.

The downside of Wrecked Extreme is the fact that it is limited edition, and quite pricy.

It’s also very important to mention that this is a strong and highly potent formula, with high caffeine content. This is not for everyone, and it’s also important to consult your doctor if you have any questions or concerns about adding a high caffeine supplement to your diet.

If you’d like to learn more about Wrecked Extreme and pick up a tub before they sell out, head on over to the Huge Supplements website.

What do you think about the Wrecked Extreme Pre-Workout review? Leave a comment below. 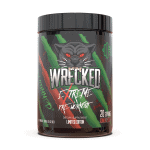