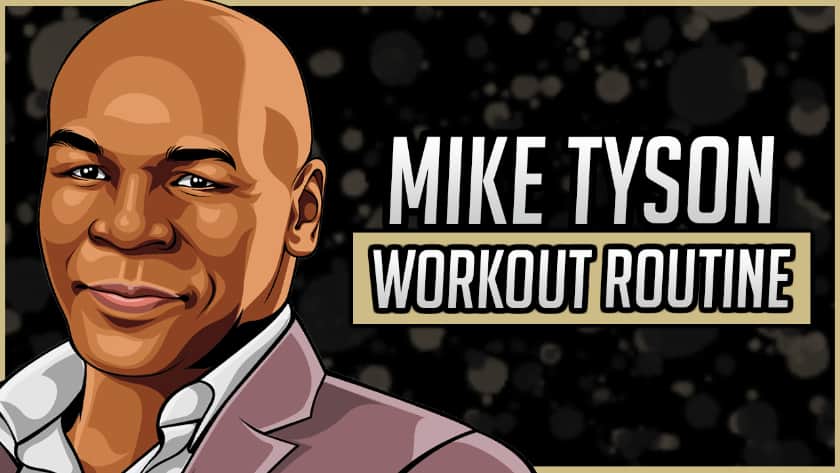 Mike Tyson is known for being the baddest boxer on the planet.

He may not have been as graceful or as political as Ali, or undefeated like Floyd Mayweather but he was the most ferocious and feared fighter that we ever had the pleasure of witnessing.

He would turn that energy into muscle by way of an equally extreme workout routine, which involved cardio, calisthenics, stretches, and boxing exercises.

Tyson would train up to 60 hours per week. His only day of rest was Sunday.

An early run was Tyson’s first workout, followed by a sparring, calisthenics, more sparring, bag work, and time on the stationary bicycle.

Iron Mike reportedly started his day around 4 am and kicked off some cardio shortly thereafter, namely a 3-5 mile run. Picture those jogging sequences from the original “Mike Tyson’s Punch-Out” video game and you get the idea.

Mike Tyson works out daily and he likes to perform a workout routine that looks the same every day. Tyson begins his day by running 3-5 miles and then he continues to do some cardio and boxing in the ring.

Back in the days, he spent 50 to 60 hours a week training, that’s more than most people spend in an office. That doesn’t sound like genetics at all.

This routine is an all inclusive full body workout with cardio and MMA/boxing training.

His nutritional diet consisted of 3000-4000 calories of carbohydrates and proteins to help build the right amount of body muscle and mass.

Every morning with breakfast, Tyson would take vitamin supplements as part of his training regimen.

Oatmeal with milk and vitamins

Pasta and steak with tropical juice

Mike Tyson has been nicknamed the baddest man on the planet. He was popular for defeating his opponents with a single blow.

Tyson’s dominant performance at the sports saw him reach the pinnacle of success, by becoming the undisputed heavyweight champion of the world.

We all know to become number one, you have to work hard just like Mike Tyson.

What do you think about Mike Tyson’s workout routine and diet? Leave a comment below.