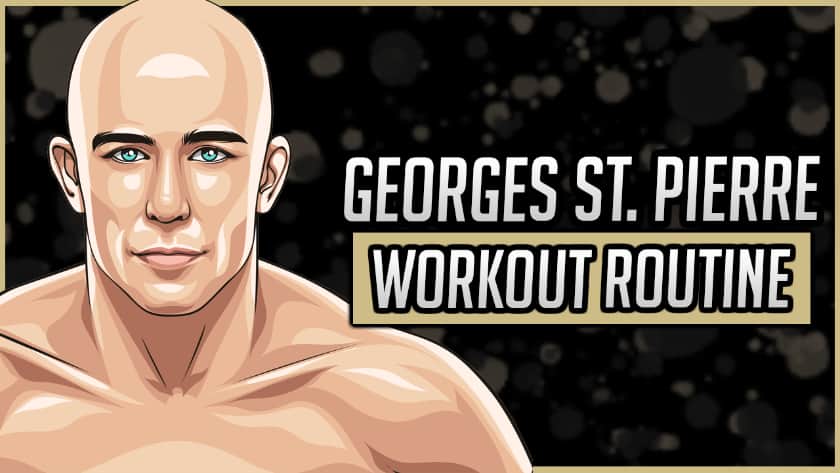 What does Georges St. Pierre’s workout routine look like?

He has an amazing and shredded body and down below we will show you his incredible workout routines.

He also likes to do sprinting and strength-conditioning. St. Pierre has stated that if you want to be a tough and good MMA fighter you have to have a good background of tough workout routines. Georges St. Pierre’s workout routine focuses on three different phases: fat loss, power, and strength. When he doesn’t have a fight coming up he always trains around 6 days a week.

St. Pierre has a lot of training partners and he trains with some of the best jujitsu guys in the world. When it comes to his diet he allows himself to have a cheat day once a week.

In this leg routine, Georges St. Pierre performs 10 different exercises with an average of 3 sets and 5 reps.

On this upper body pull routine, he hits 6 different exercises by doing an average of 3 sets and 12 reps.

2. Pull-ups with an overhand grip (3 sets to failure)

8. Upside-down handstand pushups on the wall (1 set to failure)

Georges St. Pierre drinks a protein shake before he goes to the gym.

St.Pierre normally eats 5 times a day and he loves having dessert after dinner prepared with , a half avocado, blackberries, and almonds.

He has cheat days as well where he eats pizzas and french fries.

Georges St. Pierre learned Kyokushin Karate from his father when he was 7 years old which later helped him to defend himself from a bully.

St. Pierre is a true inspiration in the fitness world. Today he is one of the best-conditioned athletes in the MMA history.

Don’t forget to share this article with your loved ones or if you have a friend who is a big fan of Georges St. Pierre.

What do you think about Georges St. Pierre’s workout routine and diet? Leave a comment below.