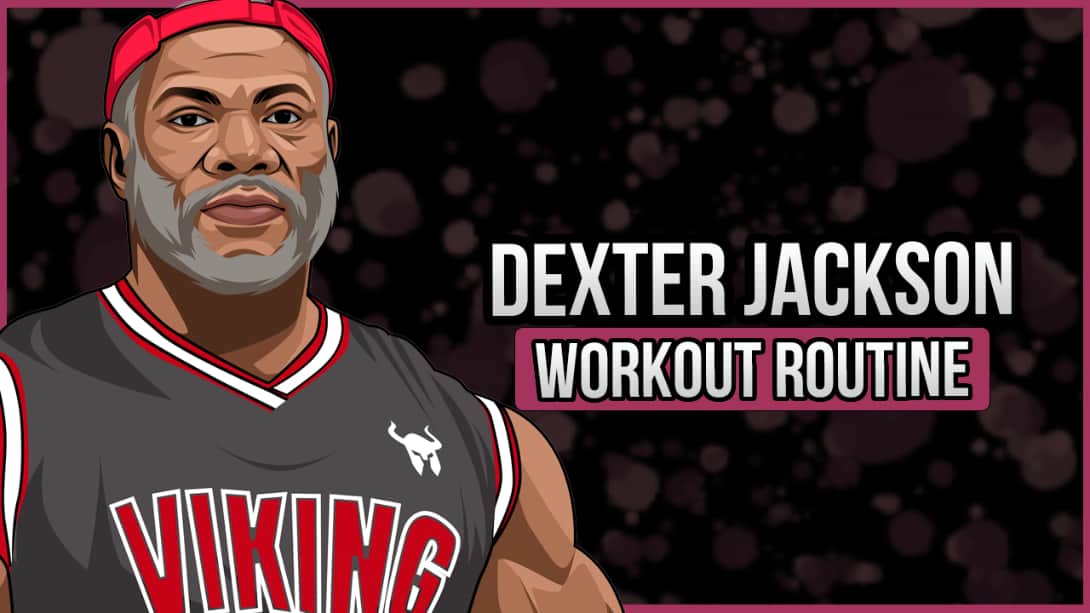 Dexter Jackson is one of the most admired professional bodybuilders in the game. His major wins include the Arnold Classic, New Zealand Grand Prix, Australian Pro Grand Prix VIII, Russian Grand Prix, and Mr. Olympia.

Jackson has been competing as a professional bodybuilder since the 90s, and the Florida native can be credited for paving the way for athletes today who compete in the sport.

Although we’ve done thorough research on Dexter’s diet and exercise regime, this article is not his exact workout routine.

It provides a general idea of what he does when training for a competition, based on interviews, his own commentary, and information from trainers.

Dexter Jackon’s biggest competitor has always been Jay Cutler, who he famously stole the Mr. Olympia title from in 2008.

Defeating Jay Cutler was a pivotal moment in Jackson’s career; he proved to the IFBB that he had the mental and physical strength to become Mr. Olympia.

Dexter sticks to the workout routine and diet plan that has proved to lead him to success at competitions. The career Dexter chose is one that requires total dedication to both fitness and diet.

Dexter’s training requires him to hit the weights hard four days a week. In the gym, he performs a few warm up sets to wake up, then moves into compound exercises in each training session.

He implements machine exercises for the smaller muscle groups, and will never sacrifice good form to get more reps.

Here is the Dexter Jackson workout routine you’ve been waiting for:

The Monday Dexter Jackson workout routine focuses on the mind muscle connection in the upper body, particularly with the challenge of the bench press.

The Tuesday Dexter Jackson workout routine moves to the lower body, allowing for a fresh muscle group to put some heavy lifting in.

On Wednesday, Dexter Jackson’s workout consists of rest and recovery. He’s worked both his upper body and lower body so far this week, and both need time to recuperate for the upcoming workouts.

Back to it! Thursday, Dexter Jackson hits shoulders and triceps with a sprinkling of calves for good measure.

The Friday Dexter Jackson workout consists of heavy back work and a few targeted hamstrings moves. This exercise routine, in particular, creates a better mind muscle connection for Jackson.

It’s worth noting that Dexter Jackson does not work out his trap muscles on their own. He’s done so in the past and felt that they got too big, narrowing the appearance of his shoulders.

Dexter Jackson takes the weekend to rest his muscles and let his body recover. His training sessions are seriously grueling, and his body needs a break.

Dexter Jackson eats a calorie-rich diet whether he’s training for a competition or not.

The Dexter Jackson diet plan consists of about 3,500 calories daily.

Dexter Jackson has a few supplements that help him maintain strength, increase muscle growth, and keep him energized during his workout program.

What do you think of the Dexter Jackson workout routine?

Jackson’s workout routine and diet plan are consistent with what other big names in the sport do, proving that Dexter Jackson is one of the best to ever do it.

As a veteran competitor in the sport of bodybuilding, Dexter Jackson has achieved so much since his early days. He paved the way for newcomers and has built a huge following of admirers who are inspired by his work ethic and inner strength.

What do you think about Dexter Jackson’s workout routine and diet? Leave a comment below.