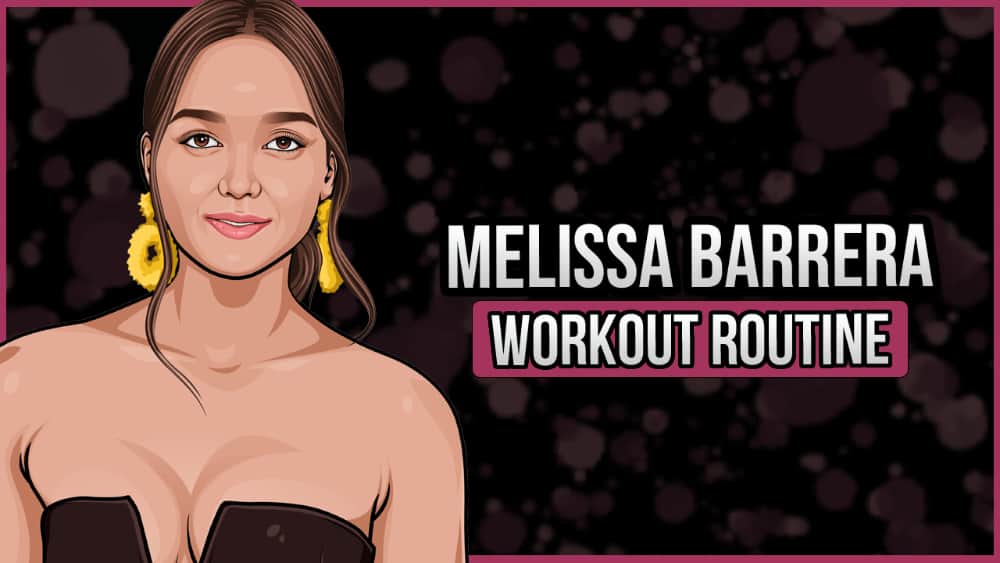 Melissa Barrera is a Mexican actress and singer. She is best known for her starring role as Lyn in the Starz drama series Vida, as Vanessa in Lin Manuel Miranda’s stage musical In the Heights, and for her starring role in Scream (2022) as Sam Carpenter. She is currently training for and filming Scream 6, which will be released in 2023.

Barrera studied musical theater at New York University Tisch School of the Arts and can be seen in several telenovelas from the early 2000s. She is a talented singer, dancer, and actress who has received critical acclaim for her starring roles.

While we’ve researched Melissa Barrera’s workout routine and diet plan, this post does not contain her exact routine. Instead, it’s a compilation of her social commentary, interviews Melissa has done, and information from experts in the industry.

As a child, Melissa Barrera fell in love with basketball at age four and never stopped playing the game. She’s always enjoyed dancing and has been an active person for as long as she can remember. She credits her exercise habits and good genetics to her mother.

Melissa Barrera explained in one interview that sweating makes her feel good about herself. Many people enjoy working out because the release of endorphins in the body during exercise can improve their mood, energy levels, and overall mental and physical wellness.

Post-workout, Melissa feels like she can conquer anything, and it gives her perspective on what really matters in life and her career.

As a busy actress and global brand ambassador, Melissa Barrera tries to work out at least five days a week.

Sweating helps her relieve stress and anxiety and gives her the chance to move her body and challenge herself physically and mentally.

The actress enjoys taking workout classes and being around like-minded people in the gym; she finds motivation in group-focused classes with other people, including her husband, Paco Zazueta.

Boxing is a fantastic outlet for Melissa Barrera to work out any frustration, stress, or anxiety she may be experiencing.

On Monday, she works with the punching bag and then joins a boxing class at her local gym.

On Tuesday, Melissa heads to the gym after work and gets on the treadmill for a 5-mile run.

To break up the workweek, Melissa Barrera heads outdoors for a hike or low-impact walk with her husband and two dogs.

On Thursday, Melissa heads to the gym and gets on a stair climber for 45 minutes, or walks on the treadmill at a full incline.

After a long week, Melissa Barrera enjoys winding down and stretching her body in a yoga class. Here’s an intermediate yoga class she may enjoy:

Melissa Barrera heads back to the gym for a high-energy cycle class. She enjoys using the exercise bike because it’s low impact and gentle on her muscles, but the workout itself is challenging and an exhausting full-body workout.

Melissa Barrera is tall and slim and has the good fortune of not having to worry too much about what she eats and how it will affect her body.

She eats about 80% clean and 20% of whatever she wants. She tries to avoid most red meat, processed foods, and refined sugar.

Barrera loves cooking and trying new recipes at home. She fuels her body with fruits and veggies, healthy fats from nuts, and a few carbs.

If she’s lacking energy in the gym or her immune system needs a boost to keep her strong and healthy during long workdays, there are a few supplements and vitamins Melissa Barrera may take.

Melissa Barrera is a rising star in Hollywood and in the process, she’s representing the Latina community on a much larger stage.

She credits her mom and sisters as the people who inspire her to never quit chasing her dreams because her story is much bigger than what she’s accomplishing; she’s also paving the way for future Latina actors.

She speaks openly about the lack of Latinx actors in Hollywood and how she hopes she can be a role model for younger generations who dream of being in the movies.

Her dedication to fitness and a healthy lifestyle and passion for the entertainment and beauty industries show just how well-rounded she is.

What do you think about Melissa Barrera’s workout routine and diet? Leave a comment below.