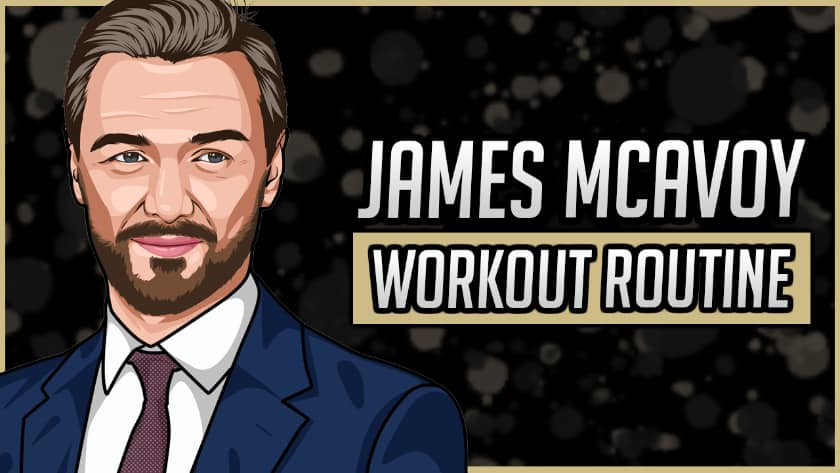 James McAvoy is a well-known Scottish actor who appears in films, TV, as well as on stage. He has received nominations for the ‘Laurence Olivier Award for Best Actor’ three times.

McAvoy also gained prominence for his role in three films of the X-Men series where he played Professor Charles Xavier, a mutant with the ability to read and control minds.

When he prepared for his roles in ‘Split’ and ‘Glass’ he had to add 16 pounds to his muscle mass.

James McAvoy added 16 pounds of muscle mass to his frame over the course of 4 months to transform into “The Beast” in the film ‘Split’, but working out was only half the equation.

For his training sessions, he would eat a snack or a meal about two hours prior to a workout to give him energy and then eat a meal again immediately after exercising to help rebuild his muscles. James McAvoy isn’t one of the actors you’d probably think of when you’re looking for workout inspiration.

McAvoy focuses on performing three BIG compound exercises 3 times a week, with additional training days to target any smaller muscle groups he might have missed.

When McAvoy was getting ready for his role in Split and Glass he had about three months to pack on as much muscle mass as possible. He took on the workout routines below to build great strength and a lot of mass on his back.

On Monday, McAvoy targets legs, back, and chest with 3 major compound exercises.

On Wednesday, McAvoy hits a legs, back and shoulders routine with the 3 most significant compound exercises for each muscle group.

On Friday, McAvoy hits a legs, back and chest routine with 3 exercises.

Aside from his fixed 3 day training routine; any additional workout days would cover a full body workout consisting of the below.

James McAvoy’s diet for the role in ‘Split’ and ‘Glass’ basically involves lots of meat, lots of veggies and lots of eggs. Strict adherence to a diet as well as an intense training program.

If you want to transform from Kevin Wendell Crumb into The Beast, rather than counting macronutrients, Magnus Lygdback recommends using your fist to determine portion sizes.

You would eat three to four eggs in the morning and for your snacks throughout the day you would eat a fist-sized portion of a protein.

James McAvoy is a Scottish actor. He made his acting début as a teen in 1995’s The Near Room and continued to make mostly television appearances until 2003.

Today, he is not only known for being a talented actor but also for being an icon in the fitness industry.

What do you think about James McAvoy’s workout routine and diet? Leave a comment below.