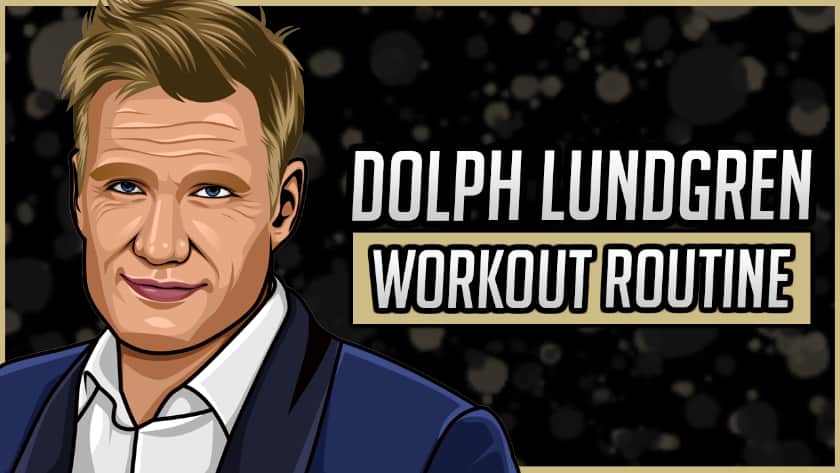 Dolph Lundgren is a Swedish filmmaker, actor, and martial artist. Lundgren is best known for portraying the role of a Soviet Union boxer named Ivan Drago in ‘Rocky IV’.

He belongs to a generation of actors who have been in many popular action movies such as Sylvester Stallone, Steven Seagal, Jean-Claude Van Damme, and Arnold Schwarzenegger.

Since then, Lundgren has starred in more than 40 movies, and he holds the rank of 4th black belt in Kyokushin karate.

He was also a European champion in 1980 and 1981. In 1996, he was selected to serve as the team leader to the US Olympic Pentahalon team.

Dolph Lundgren has spent 5 years training with Tadashi Nakamura and Shigeru Oyama. In 1996, he was selected to serve the US Olympic Pantahalon team.

When he prepared for his role in ‘Rocky IV’ he worked out with Sylvester Stallone 2 hours per day.

They both performed a bodybuilder type routine in the morning and then they performed boxing in the afternoon.

Dolph Lundgren normally works out 6 days a week and he does a 1 hours session in the morning. When he prepared for ‘Rocky IV’ he had to change up his karate routines.

He began work on speed and flexibility, and he had to build up his muscle mass by performing lots of weight lifting. In just a few months Lundgren had gained about 15 pounds of pure muscle.

This old school strongman routine is performed by doing 6 different exercises with an average of 3 sets and 15 reps.

This recovery circuit routine is performed by doing a total of 5 different exercises.

Dolph Lundgren had to eat like a bodybuilder to get into his role for ‘Rocky IV’. Lundgren would have to eat every few hours to fuel his metabolism.

He also used multiple supplements such as amino acids and different protein products.

When he’s not preparing for a movie role he still prefers to stick to a clean diet with complex carbs, lean protein, and healthy fats.

Dolph Lundgren is an amazing actor, filmmaker and martial artist from Sweden who is best known for his works in ‘Rocky IV’, ‘Universal Soldier’, and ‘The Expendables’.

In 1985, he won the “Marshall Trophy for Best Actor” and as a martial artist, he holds a black belt. Don’t forget to share this article with your loved ones.

What do you think about Dolph Lundgren’s workout routine and diet? Leave a comment below.