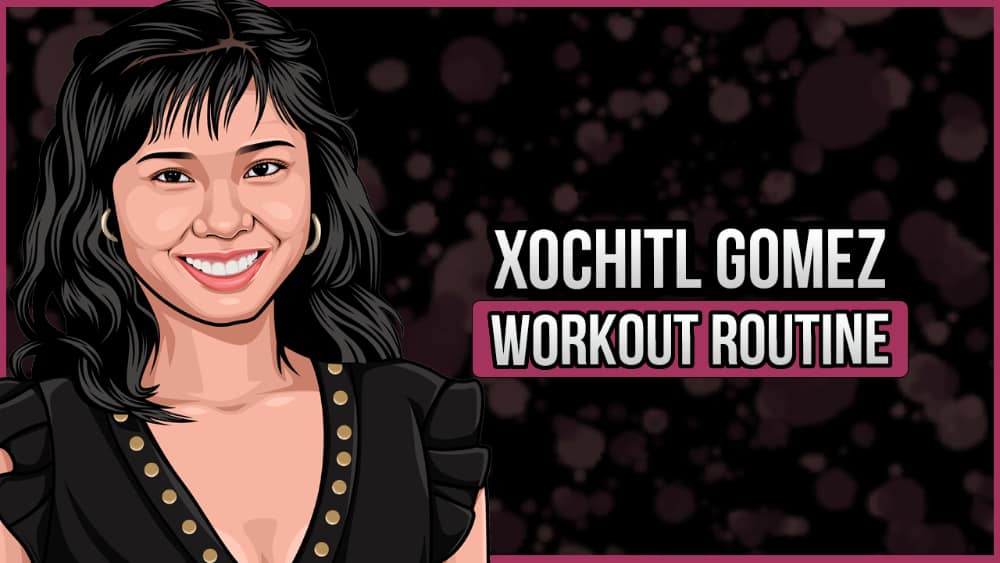 Xochitl Gomez is an American actress, best known for her role as Dawn Schafer in the Netflix series, The Baby Sitters Club. She was also recently cast as America Chavez, a Marvel heroine in the upcoming film Doctor Strange and the Multiverse of Madness.

Xochitl has been acting since she was 5 years old and knew she wanted to get into film and acting shortly thereafter. She hustled for years, going to every audition she could, sending her tapes, and finally got her big break!

While we’ve done thorough research on Xochitl Gomez and her workout routine and diet plan, this is not the exact routine she follows. This is a compilation of her social commentary, interviews she’s done, and information from experts in the industry.

As a 16-year-old girl who just became the youngest Latina Marvel superhero, Xochitl Gomez has a lot riding on her to succeed. Her character, America Chavez, is also the first member of the LGBTQ community in the MCU.

While she received helpful training advice from Benedict Cumberbatch and Elizabeth Olsen on the Doctor Strange film set, Xochitl Gomez had to learn the ropes of stunts and wirework simply by doing them on repeat with a coach.

Once she got a callback and then landed the role, Xochitl Gomez immediately began strength training, boxing, MMA training, and doing cardio to fully prepare for her role as America Chavez.

While it’s not clear whether she worked with a trainer, most Marvel Studios heroines do because their stunt work is so intense and demanding. Xochitl Gomez worked out six days a week leading up to filming and tried to squeeze in a workout each day while filming as well.

Here’s a full-body strength training program Xochitl Gomez does to target and tone both her upper and lower body.

15 minutes on the treadmill

To prepare for her role as America Chavez, Xochitl Gomez trained twice a week in MMA training so she could fight the villains alongside Doctor Strange and all her co-stars.

MMA training is a highly effective form of exercise because it improves focus and concentration, relieves stress, and improves cardiovascular health.

On Wednesday, Xochitl Gomez goes on a long 6-7 mile run to build on her endurance, particularly for grueling fight scenes that may need to be reshot several times before the director is happy with them. Doing a fight scene once is challenging enough, but to have to go back for several takes means you must be in tip-top physical shape.

Xochitl Gomez takes a kickboxing class on Thursday, where she works on her strength while keeping her heart rate up and the blood flowing. Kickboxing improves posture, burns major calories, and is the ideal cross-training workout for any fitness level. You can use wrist or ankle weights to make the exercise more difficult as well.

On Friday, Xochitl Gomez is back in the gym for a full-body strength training workout. Here’s what that looks like:

After lifting heavy and working out in a gym all week, Xochitl Gomez goes outdoors on Saturday for a long, slow run around her neighborhood and surrounding areas. Xochitl loves exercising outdoors because it is therapeutic for the mind and the body.

After many intense workouts during the week, Xochitl Gomez takes Sunday off to let her body rest and recover. If your body is sore from the last few days of exercising, we recommend using a foam roller to work out any stress or lactic acid in your muscles.

Since she’s just 16 years old, Xochitl Gomez doesn’t have to worry as much about what she puts in her body and how it may affect her appearance. She does, however, have to eat nutritious foods that fuel her body and give her energy and power during workouts and while she’s in character as America Chavez.

Xochitl is a big snacker and enjoyed finding more nutritious items that she could eat when in training for Doctor Strange and the Multiverse of Madness.

There are a few supplements and vitamins that Xochitl Gomez probably takes to fuel her workouts and keep her energized.

From the set of Doctor Strange and the Multiverse of Madness to The Baby Sitters Club, Xochitl Gomez excels at her work because she’s a passionate young girl who puts her all into everything she does.

We look forward to seeing Xochitl Gomez on the red carpet and representing the Latinx community through her social activism and any movie she’s a part of.

What do you think about Xochitl Gomez’s workout routine and diet? Leave a comment below.