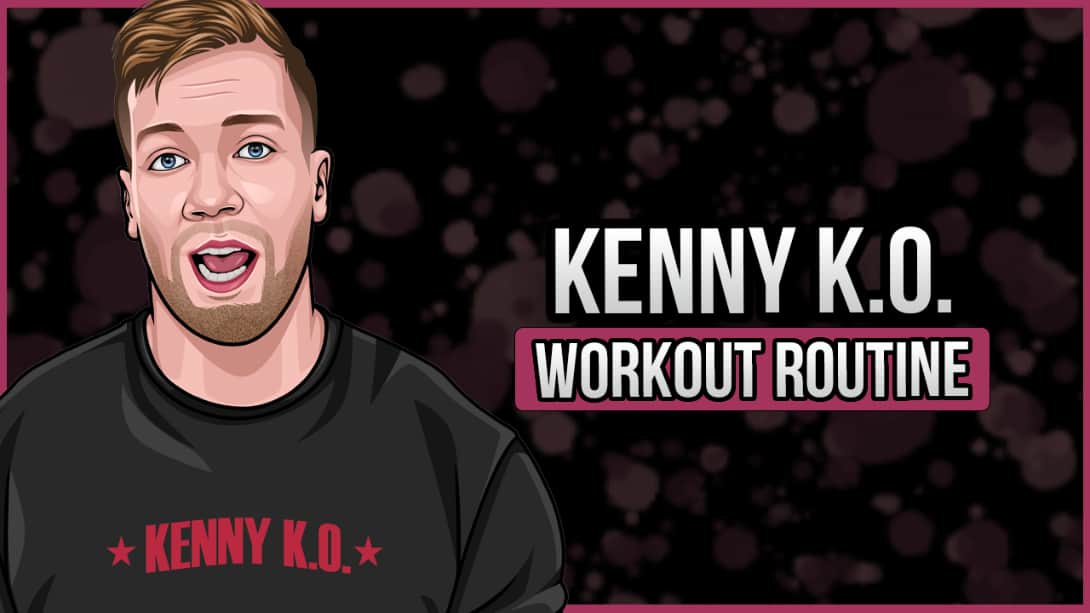 Kenny KO is a bodybuilder, entrepreneur, and fitness personality who gained fame on YouTube beginning in 2011. Kenny creates commentary-style videos where he discusses and criticizes famous bodybuilders, NPC competitors, and IFBB pros.

While his comments and actions are often controversial, Kenny KO seems to be a semi-credible source for fitness advice and he’s grown an impressive fanbase over the years.

Kenny is also pretty ripped himself — we took it upon ourselves to comb the internet for Kenny KO’s workout routine and diet plan, based on his commentary, videos and content on social media, and information from others in the industry.

Kenny KO’s YouTube channel consists of videos and commentary on professional bodybuilders and the controversy behind natural training vs. steroid usage in the sport.

Kenny KO is known for criticizing people in bodybuilding for photoshopping and doctoring images of their transformations.

He has also built a substantial following on his Instagram, where he posts videos of his own workouts, training in the gym, and keeps fans up to speed with his healthy lifestyle.

Kenny is a controversial figure in the fitness industry because of his claims that he gained 20 pounds in one week by using a drug combination of HGH & insulin. Not only is this protocol extremely dangerous and deadly, but nearly impossible to achieve for most people.

Kenny has shared his use of performance enhancers and steroid alternatives but often dissuades his followers from using the former.

Kenny’s been in the fitness industry for over a decade; he’s got the muscle mass, nutrition knowledge, and experience with supplements and performance enhancers to prove it.

His workout routine consists of five days in the gym and two days of active recovery. Kenny KO often trains multiple muscle groups per workout, but this is a breakdown of the types of exercises he can be found doing on a daily basis.

Kenny starts the week off by crushing his glutes, quads, calves, and hamstrings with this leg day burner.

Here’s how Kenny Ko trains his biceps and triceps on Tuesday:

Kenny does this ab workout twice a week to keep his core strength up and to develop his obliques.

Kenny rocks a pretty iconic chest that he’s often seen training in his videos. Here’s how you can build massive pecs like Kenny:

Arguably his favorite workout of the week, Kenny hits the gym on Friday to carve out his back muscles. Here’s a typical workout Kenny would do to train his back:

Kenny KO is not a fan of cardio and he’s not afraid to admit it.

Any active recovery Kenny does on the weekends likely consists of a hike or walk outside, you’ll rarely see him training on a cardio machine or engaging in any type of cardiovascular exercise.

Instead, he chooses to take shorter breaks between sets to keep his heart pumping and the blood flowing, forcing his body to work harder in a way that mimics cardio exercise.

Kenny KO’s muscle mass may be achieved in the gym, but it’s definitely maintained in the kitchen through his dietary choices. Kenny is no stranger to experimenting with various fitness challenges, dropping and gaining weight for various competitions and videos.

He does this by supplementing, increasing his caloric intake, and altering his workouts.

The Kenny KO diet is fairly typical of a bodybuilder of his size and stature. He is fairly tall for the sport, standing somewhere near 6 feet and weighing around 230 pounds.

When he isn’t training for a challenge or experiment, he eats around 3,000 calories per day. Kenny eats lean protein, complex carbs, and plenty of vegetables.

While Kenny KO has dealt with his fair share of controversy, drama, and legal situations thanks to his YouTube channel and polarizing videos, there’s still no doubt that he is a phenomenal athlete.

Kenny has pushed his body to the limits several times over the last decade and he claims to do it all for his fans, so they can better understand what the IFBB pros put into their bodies to achieve such insane results.

Kenny KO claims to be the only honest fitness YouTuber as he exposes other athletes in the industry as they doctor images, withhold training information, and try to deceive their fans.

Kenny’s not perfect, but he’s trying to improve the stigma behind the sport by promoting transparency about what it takes to be a bodybuilder.

What do you think about Kenny KO’s workout routine and diet? Leave a comment below.