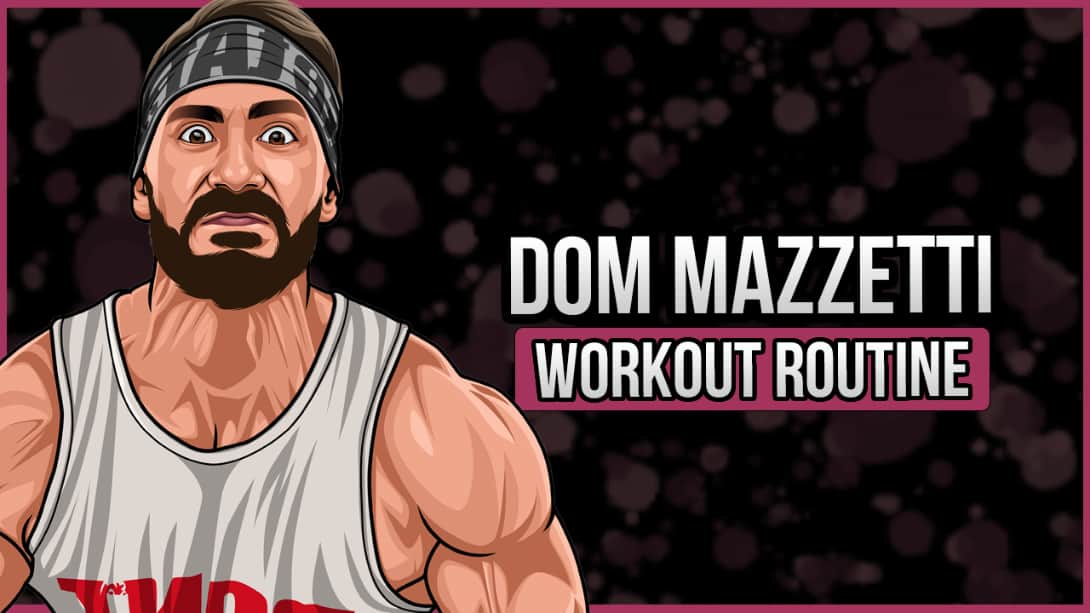 Dom Mazzetti is a fictional character whose real name is Mike Tornabene, a comedian and fitness influencer. Mike and his longtime friend Gian Hunjan created Dom Mazzetti in 2011, and since then, the Bro Science Guy has built a massive fanbase and following across the internet.

This post shares Dom Mazzetti’s exercise and diet regime; much of this routine is created from what we think he would do, based on Dom’s fictional character, comments made by Mike and Gian, and the videos they share on the internet each week.

This is not Dom’s exact workout routine, but that’s a YouTube video we’d love to see.

Dom Mazzetti’s YouTube channel, BroScienceLife, shares tons of hilarious, bro-inspired videos that encourage gym-fanatics, athletes, and everyone in between to not take themselves so seriously in the gym and in life.

Dom accurately pokes fun at the typical jacked weightlifter in the gym, with Mike getting positive feedback on this character for nearly a decade. The online world hails Dom Mazzetti as the fitness character Bro Science Guy and they love following his parody workout videos.

Mike Tornabene describes his intention behind the character of Dom: we should all live a healthy, active lifestyle and not take life too seriously, especially workouts.

Dom Mazzetti can be seen occasionally pumping iron and getting jacked in his fitness videos, but the guy behind the character, Mike Tornabene, really does have to work out consistently to look so ripped.

Mike Tornabene has found major success with a consistent fitness routine and trains five days a week. He finds that his best ideas for videos and YouTube content come when he’s working out. Mike prioritizes his overall health; he’s not just focused on weightlifting or gains when he’s training hard.

Dom starts off the week strong on Monday with an intense bicep burner in his workout program. Training the biceps is a huge part of Dom’s workout routine because he defines success as achieving gains quickly (and maintaining them).

Dom is back in the gym on Tuesday, training his triceps to be just as awesome as he is.

On Wednesday, Dom Mazzetti is back in the gym with his fitness pal Bradley Martyn, who is also a huge influence on Dom’s character. Together they conquer an intense full-body strength training circuit, likely film a video together, and celebrate being bros.

On Thursday, Dom Mazzetti pivots his training from heavy lifting to some conditioning and cardio. He may not be the biggest fan of cardio, but Dom Mazzetti agrees that cardio has its place in weight training.

To kick off the weekend, Dom performs a grueling ab workout.

Dom Mazzetti takes the weekend to rest up, film videos, interact with the online world, and let his body rest from getting jacked in the gym all week.

Fictional character or not, Mike Tornabene and Dom Mazzetti both take recovery seriously. Pursuing fitness goals requires rest and recovery to come back to the gym stronger and ready for anything.

Dom Mazzetti’s diet is fairly strict so he can stay focused on workouts and his level of fitness. He eats to remain energized and fuel his muscles and get bigger gains.

Dom avoids sugar, fast food, and anything with unhealthy fats. He treats his body like a temple (besides all the alcohol) and eats six meals every day. He finds this strategy is the most effective for his fitness journey.

It wouldn’t be a Dom Mazzetti workout routine without supplements. He incorporates supplements in his diet plan to boost his training, achieve massive gains, build endurance, and keep his energy up during his workouts.

His character may be a parody, but Mike is serious about fitness and uses supplements as a tool to fuel his body.

Dom Mazzetti and his alter ego Mike Tornabene have received positive feedback and tons of support for nearly a decade from fitness enthusiasts, comedians, and fans all around the world.

When Mike isn’t training, he’s working with Gian on new material and video content for Dom Mazzetti. They find inspiration for Dom through the life experiences they’ve had; whether it’s college, women, nightlife, or the gym.

Have you caught any footage of the Dom Mazzetti workout routine? He’s sure to make you laugh out loud with his satirical but accurate impressions of the fitness industry and all of its bros. It’s no wonder he’s got over 2 million people following along!

What do you think about Dom Mazzetti’s workout routine and diet? Leave a comment below.