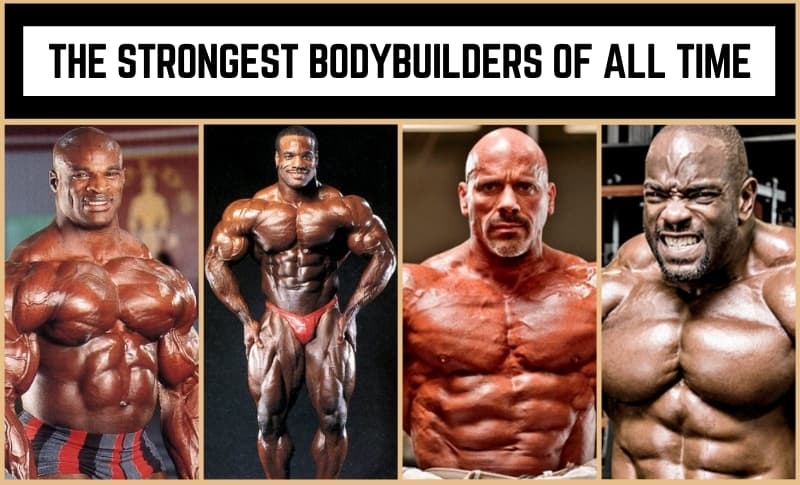 Who are the strongest bodybuilders of all time?

Well, there are some gigantic bodybuilders out there, no question about it, but not all of them are as strong as they look.

So, we thought we’d scan through bodybuilding history to find out who the strongest bodybuilders are and how they compare.

We’ve got guys on the list that squatted 635lbs for reps and one that deadlifted 800lbs like it was nothing!

Let’s check them out.

Here are the strongest bodybuilders of all time.

The list of bodybuilders and figures mentioned below has been compiled from various web sources, such as Muscle & Fitness & Wikipedia.

These are the strongest bodybuilders of all time.

Larry Wheels is considered more of a strongman than a bodybuilder.

However, he’s competed in many bodybuilding shows throughout his career and built his impressive physique using traditional bodybuilding techniques, and therefore, we’ve included him on this list.

There’s no question that Wheels’ is strong. At 21, he was bench pressing 620lbs, and just a few years later, he attempted a 700lb bench press world record.

Add that to his already impressive lineup of powerlifting records in the 242 and 275 weight classes, and it’s easy to see why he’s categorized as one of the strongest bodybuilders of all time.

His most recent world record came from several different lifts, including the squat, bench press, and deadlift.

He managed to hit some massive numbers, including an 855-pound deadlift (388kg), which made him the new world record holder in that particular by 0.1lbs.

Like Larry Wheels, Ben White comes from a powerlifting background.

He transitioned into professional bodybuilding in 2007 after winning his IFBB Pro card at the USA Championships.

Some of Whites’ most impressive lifts include a 605lb raw bench-press in the 275-pound class, which is still the ninth-best raw bench press ever in that weight class, and a 705lb raw deadlight in the same year.

Apart from his ability to push heavyweight for a one-rep max, he’s also renowned for his capacity to lift heavy for reps.

Considered to be one of the greatest teenage bodybuilders ever, Casey Viator was most known for winning the 1971 Mr. America title.

After taking the title, Viators’ bodybuilding career slowed down a lot, choosing to compete as and when he felt like it.

He won three pro contests in 1980 and placed third in the 1982 Mr. Olympia – the most prestigious bodybuilding show on the planet.

For his generation of bodybuilders, Viator was a beast, coming in at 230lbs at 5’8″.

Eddie Robinson made his professional bodybuilding debut in 1990, a year after winning the USA Championships.

He gained a lot of attention at the beginning of his career and competed in 13 additional IFBB Pro competitions.

Robinson was strong as hell and was well known for pulling some big numbers in the powerlifting scene.

However, there’s not much evidence to support these lifts apart from a photo of him locking out an estimated 535lb bench press, wearing nothing more than a T-shirt.

Robinson retired from professional bodybuilding at 34 and has managed to stay in fantastic shape ever since.

Some of his most notable achievements in bodybuilding were taking the 1980 Mr. Universe title and placing third in 1981 Mr. Oylmpia.

Platz was renowned for having some of the best wheels (legs) in pro bodybuilding.

He claims to have built his monstrous legs by performing a ridiculous routine, including 635lb squats for 15 reps, 350lb squats for 52 reps, and 225lb squats for 10 straight minutes, reaching over 100 reps on numerous occasions.

Now, that might seem impossible, but there’s video footage, shot in 1992, of him repping 525lbs for 23 reps, pure ass-to-grass!

The next strongest bodybuilder of all time is Stan Efferding.

He’s another bodybuilder who also has a history in powerlifting.

Efferding started competing in physique contests in 1988, which was approximately eight years before he competed in his first powerlifting meet.

However, after taking nine years out of competing professionally, Efferding decided to make a comeback in his 40s, winning a 2009 Masters title and taking ninth place at the 2011 FLEX Pro.

He also earned IFBB Pro League Status and cemented his name amongst some of the world’s strongest bodybuilders and powerlifters.

Efferding is known for his strength across all three major compound movements, the bench press, squat, and deadlift.

And, in 2013, he won the Olympia World’s Strongest Bodybuilder title.

Two-time Mr.Olympia winner Franco Columbu was only 5’5″ and 185lbs but was, without doubt, one of the strongest bodybuilders of all time.

Known for bending steel bars, lifting cars, and blowing up hot-water bottles, the Sardinian Strongman was reported to lift some impressive weight throughout his bodybuilding career.

Columbu also competed in the World’s Strongest Man and placed fifth in 1977, only due to being outweighed by 100lbs by four other competitors.

However, pound for pound, there’s no question that Franco Columbu is one of the all-time strongest bodybuilders.

Related Products >> The 10 Best Pull Up Bars to Buy

Johnnie Jackson had a very successful career as a professional bodybuilder and powerlifter.

Jackson didn’t start powerlifting until after he’d finished competing as a professional bodybuilder. Still, he quickly made a name for himself in the sport, going on to set the deadlift world record at 814lbs in the 220lb weight class.

He reached a whopping 2,127lbs in competition, including a 540lb bench press and an 826lb squat.

However, Jackson is most known for repping 100-pound dumbbells for 10 on side laterals – something most guys could only dream of pressing!

Johnnie Jackson is one of the strongest bodybuilders of all time for his height and weight class.

If you followed bodybuilding in the ’90s, then you’ll of heard of Chris Cormier.

Not only did he have an impressive physique, but he was also strong as hell.

He won 11 professional bodybuilding contests, finished third at the Olympia in 1999 and 2002, and came second at the Arnold Classic six years in a row.

His numbers were insane, and that’s why he built some of the strongest legs and pushing power in bodybuilding history.

At approximately 320lbs in the offseason and 300lbs on stage, Ronnie Coleman was a mass monster.

The eight-time Mr.Olympia champion was ridiculously strong across the board, not just pushing, pulling, and squatting, but absolutely everything!

Big Ron was a renowned advocate for training heavy, and there are videos of him squatting 765lbs for four reps, 800lbs for two, and pulling deadlifts of 800lbs!

However, he was also known to press 200-pound dumbells for 12 reps and perform 365lb lunges in the gym’s parking lot.

Ronnie wasn’t just one of the biggest bodybuilders of all time; he was also the strongest.

We hope you enjoyed our list of the strongest bodybuilders of all time.

Hats off to all the guys on the list. They’re superhuman by anyone’s standards.

Here’s a quick recap of the strongest bodybuilders of all time: