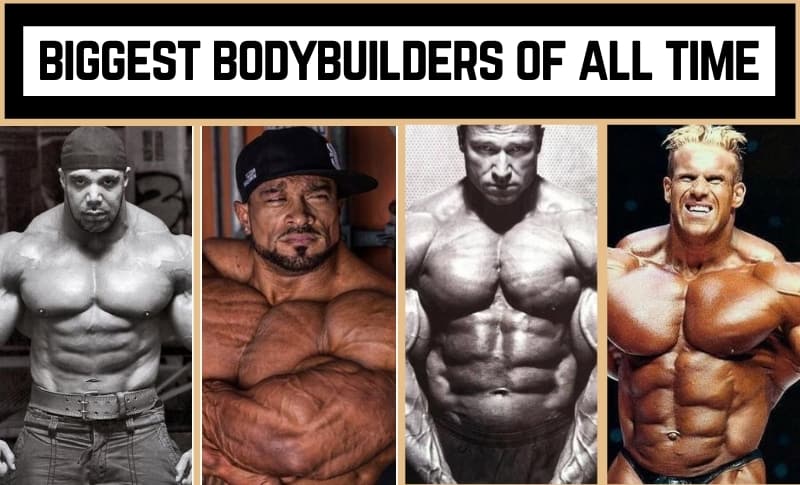 Who were the biggest bodybuilders of all time?

The biggest bodybuilders of all time are enormous!

If you’ve been training for a while, then you’ll know what it takes to gain quality muscle.

Years of dedicated training, strict nutrition, and self-belief are all required to make monstrous gains.

That’s why the bodybuilders listed below are indeed the cream of the crop, as to reach their size, you have to dedicate your life to the sport.

So, let’s see who these behemoths are.

Here’s a list of the biggest bodybuilders of all time.

The list of bodybuilders and figures mentioned below has been compiled from various sources around the web, such as Muscle & Fitness & Wikipedia.

These are the biggest bodybuilders of all time: 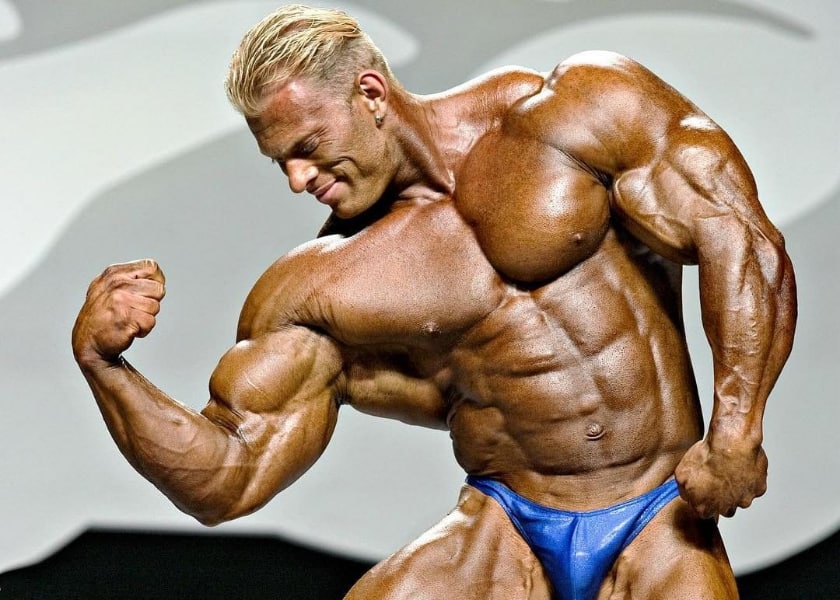 He began training at the tender age of 15 and was competing in shows at 21.

He turned pro in 2005 and made his professional debut at the World Amateur Championships in 2006.

The “Big Bad Wolf,” as he’s also known, won the IFBB Arnold Classic in 2014, and took fourth place in the 2015 Mr. Olympia, which are the two biggest shows in the sport of bodybuilding.

Wolf is known for his small waist, outer quad sweep, and having one of the biggest bodies in professional bodybuilding.

At a competition weight of 260lbs, Dennis James was a force to be reckoned with.

James was born in Heidelberg on May 31, 1996, and began his bodybuilding journey at the age of 18.

He won his first competition in 1985 and competed in Mr. Olympia for the first time in 2000.

James’ placed 4th in the 2003 Mr. Olympia, which was his highest placing in the biggest bodybuilding show on the planet.

In the off-season, James was known to weigh in around 300lbs, cutting to a contest stage weight of 260lbs. 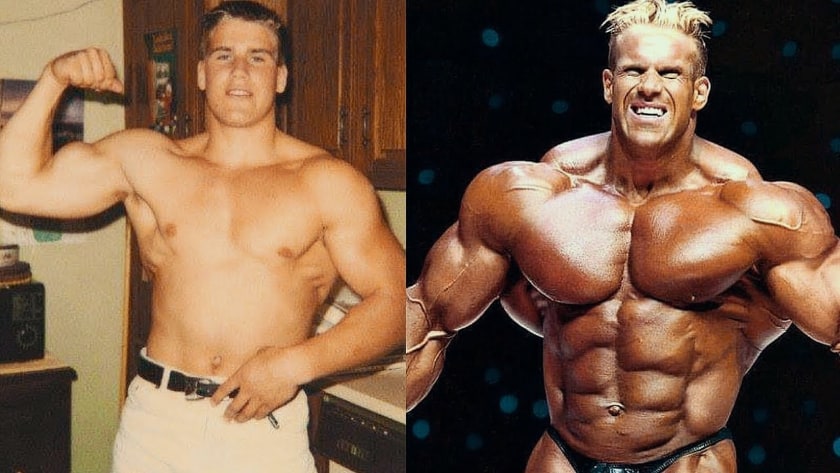 Without a doubt, he had one of the best physiques in bodybuilding of all time.

The American IFBB pro, bulked up to approximately 300lbs in the off-season, slimming down to 260lbs to do battle. 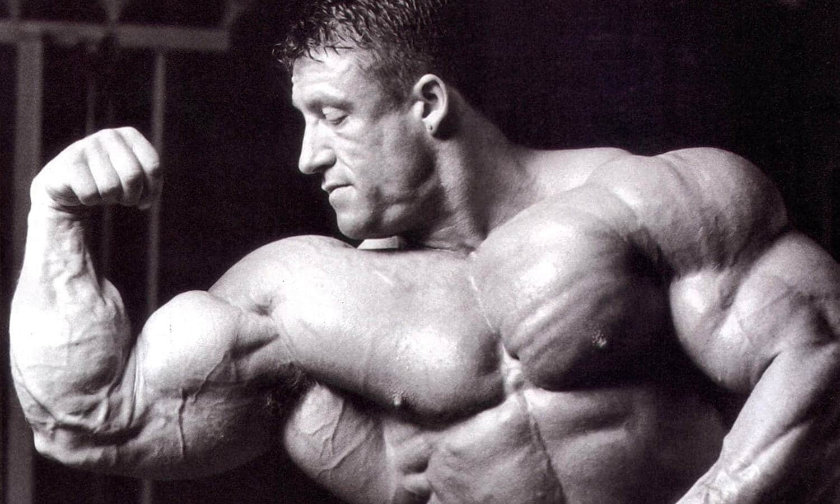 This man needs no introduction. He’s the original mass monster, who had one of the biggest backs in bodybuilding, and is a six-time Mr. Olympia champion.

He began lifting in 1983 and made his professional debut at the Newcastle Pro in 1991.

Yates had a reputation for turning up to major bodybuilding shows and wiping the floor with the competition.

This is how he became known as “The Shadow.”

During the off-season, Yates packed on the pounds and weighed in around 310lbs. 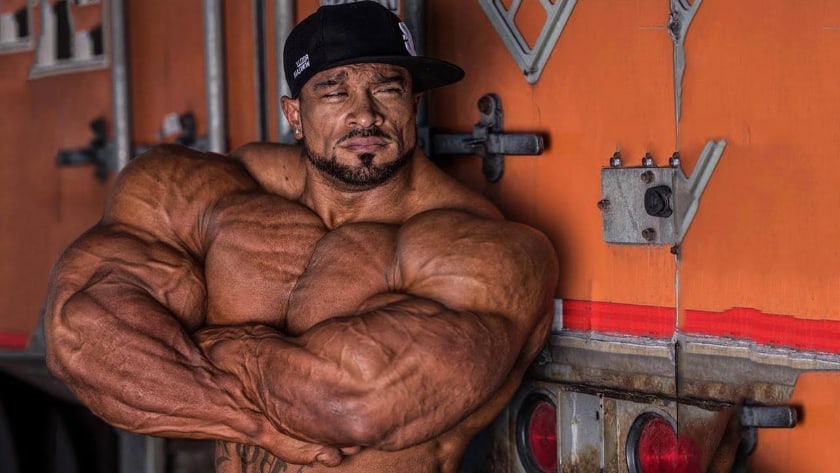 Roelly Winklaar is a dutch IFBB pro bodybuilder, who was born on June 22, 1977.

Knicknamed “The Dutch Beast,” Winklaar bulks up to a monstrous 320lbs in the offseason and cuts down to a contest weight of 265lbs.

Roelly has one of the most impressive physiques in the sport of bodybuilding and is best known for his gigantic arms.

Some of his best wins include taking first place at the Australian Arnold Classic and fifth place at the 2019 Mr. Olympia.

He was crowned the peoples champion at the 2018 Mr. Olympia and has since built up an impressive following due to his freakish size and premium genetics. 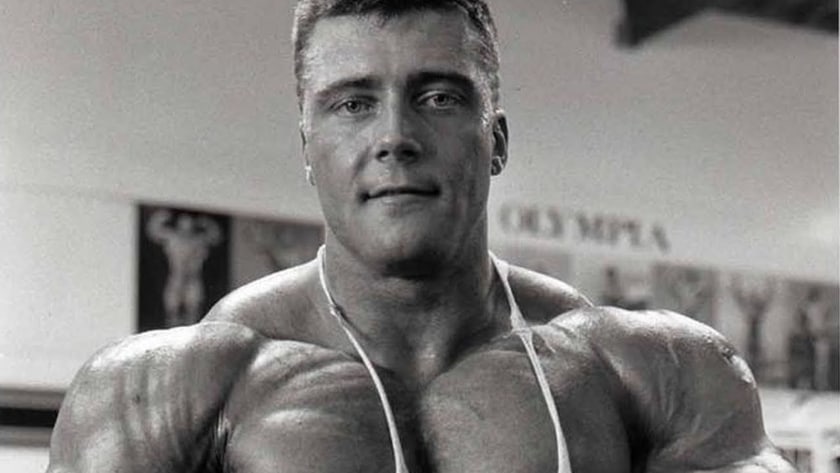 His freakishly cartoon-like physique gained him a lot of attention, and he quickly became known as a force to be reckoned with in the sport of bodybuilding.

He was competing against the likes of Dorian Yates and Paul Dillet, who were both mass monsters, and managed to place amongst the top eight in the 1996 and 1997 Mr. Olympia.

Fux competed as a professional bodybuilder until 2001 until his career was cut short due to an infamous accident.

The next beast on the list is Egyptian IFBB Pro, Nasser El Sonbaty.

Sonbaty made his debut appearance on the Mr. Olympia stage in 1994, placing 7th, and competed in approximately fifty-three IFBB Pro shows throughout his career.

He’s known for wearing his trademark “round spectacles” during training and posing. And, it’s believed that his nickname, “The Professor,” came about because of his fluency in several languages.

During the offseason, Sonbaty was known to reach up to 330lbs, trimming down to 279lbs for competitions. 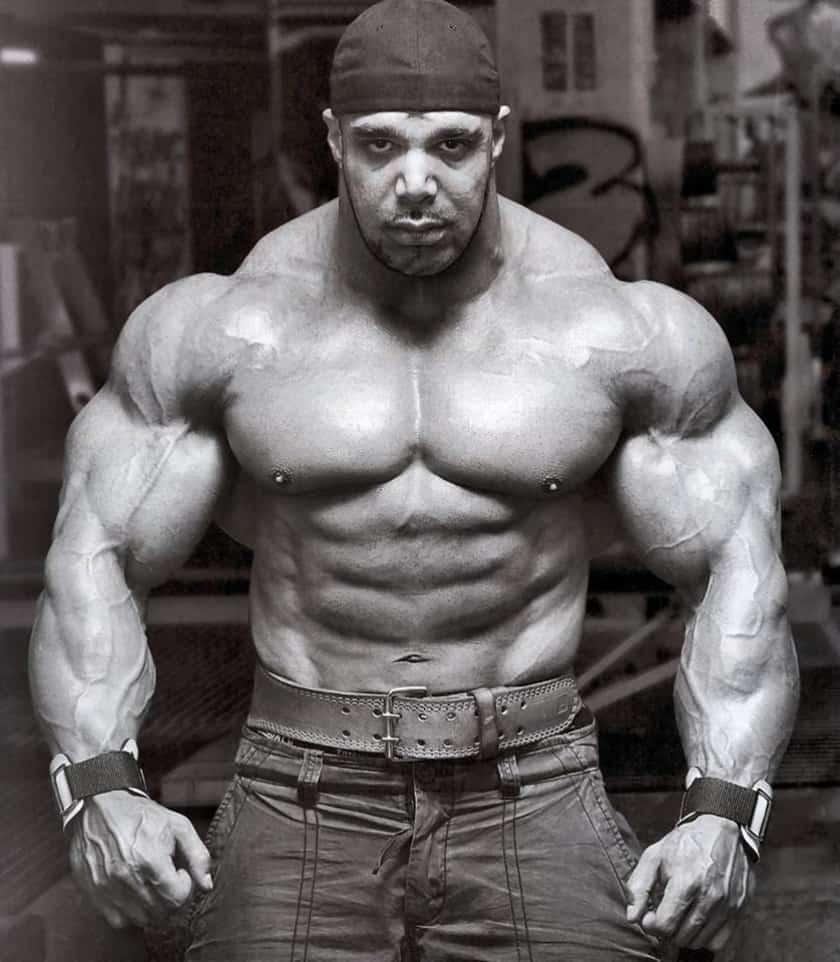 Zack “King” Kahn is an absolute beast and one of the most underrated bodybuilders in the sport.

When you think about mass monsters, the usual names spring to mind, like Dorian Yates, Paul Dillet, and Ronnie Coleman.

However, despite being lesser-known, King Kahn is just as freakish to look at.

Zack earnt his IFBB Pro status in 2009 but didn’t make his professional debut until 2013, due to an injury.

Unfortunately, that marked the first in a series of injuries for Kahn, and we’ve not seen much of him on the Pro circuit since.

Still, he’s easily earnt his place on this list and is the eighth biggest bodybuilder of all time!

Markus Rühl began training when he was 18, after receiving medical advice from a doctor about a knee injury he got while playing football.

After only five years of training, he competed in his first professional show and went on to become known as one of the biggest mass monsters in the history of the sport.

Rühl competed in several Mr. Olympia competitions throughout his career, with a 5th place finish in 2004 as his most notable achievement in the competition. 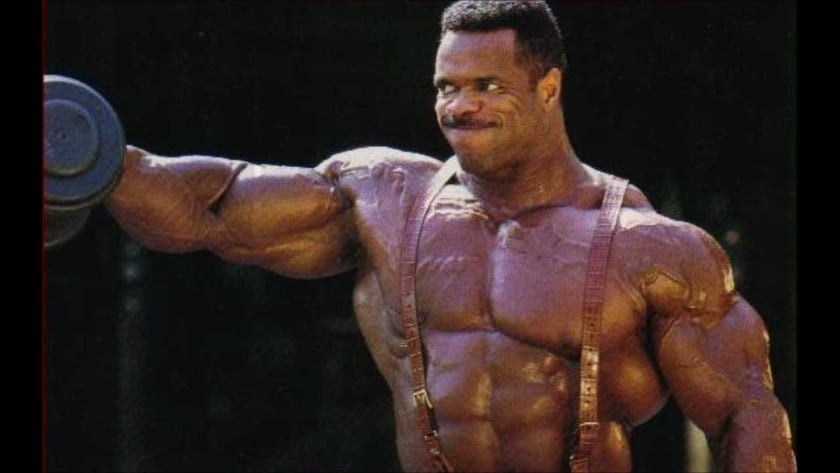 The sixth biggest bodybuilder of all time is “Jurassic Paul,” otherwise known as Paul Dillet.

The retired Canadian IFBB Pro bodybuilder was one of the most impressive looking bodybuilders you’ll have ever seen.

He made his pro-debut at the Arnold Classic in 1993 and won the Night of Champions in 1999.

His highest placing in the Olympia was in 1994, where he placed 4th overall.

Dillet ballooned up to a whopping 330lbs in the off-season, cutting down to an impressive 285lbs to do battle. 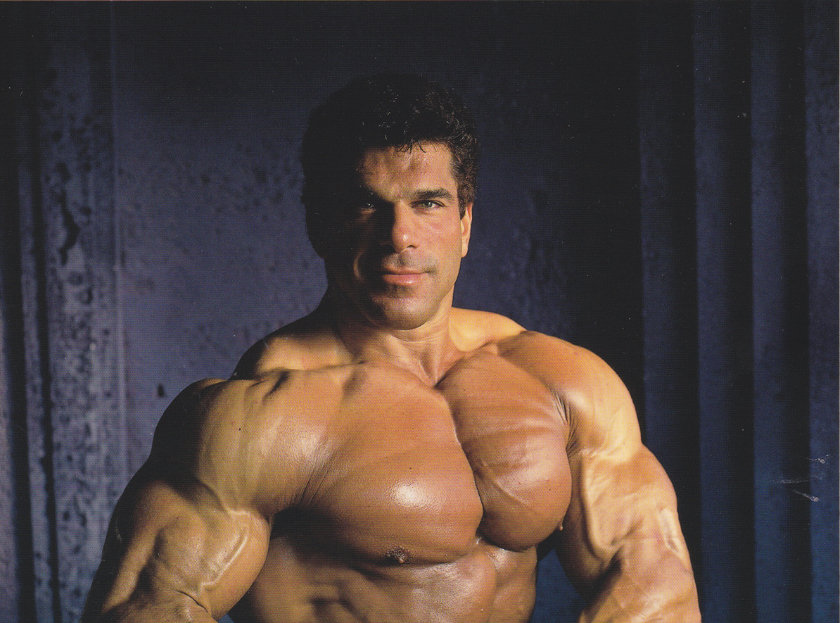 It can’t be the biggest bodybuilders of all time list without “The Incredible Hulk,” now can it?!

Lou Ferrigno is a former American IFBB Pro bodybuilder, who made his professional debut at the NABBA Mr. Universe in 1972.

He’s competed in several competitions throughout his career, with some highlights including winning the IFBB Mr. America and IFBB Mr. Universe titles.

After a successful career in the sport, Lou pursued a career in acting and was cast for his most famous role, “The Hulk,” in 1977.

At a whopping 6’4″ and weighing 285lbs in contest shape, Ferrigno was a site to be reckoned with in his heyday, so it’s no surprise that he became “The Incredible Hulk.”

Now retired, Schlierkamp was a sight to behold at the pinnacle of his career.

Getting up to 330lbs in the offseason, Günter was one of the biggest bodybuilders of any era, and his physique was spectacular.

His highest placing in the Olympia was in 2005, where he placed 4th.

However, many people believe he should have placed higher, as he looked a lot better than the top three competitors. 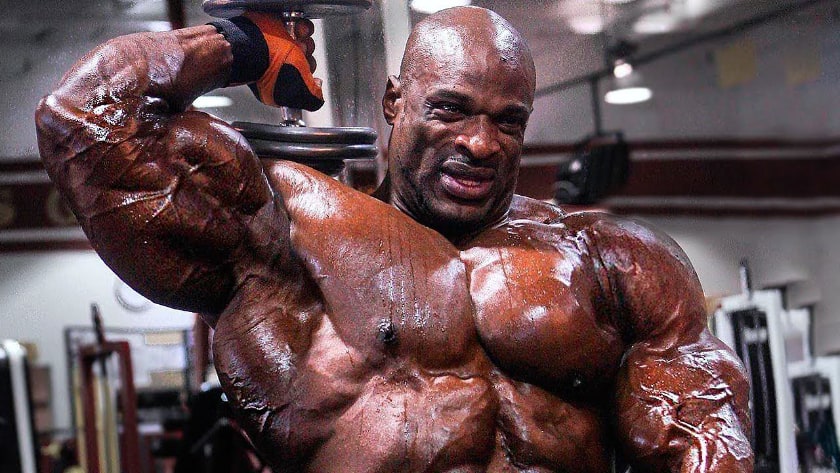 After deciding to compete in bodybuilding because of a free gym membership, Big Ron is now widely regarded as one of, if not, the greatest bodybuilder of all time.

After Dorian Yates, Coleman stepped bodybuilding up another notch once again and dominated the sport with his mass and size.

Coleman had one of the biggest backs ever in the sport of bodybuilding, and his legs were unfathomable!

When he retired from the sport in 2009, he held the record for the most wins as an IFBB professional, with 26 titles to his name. 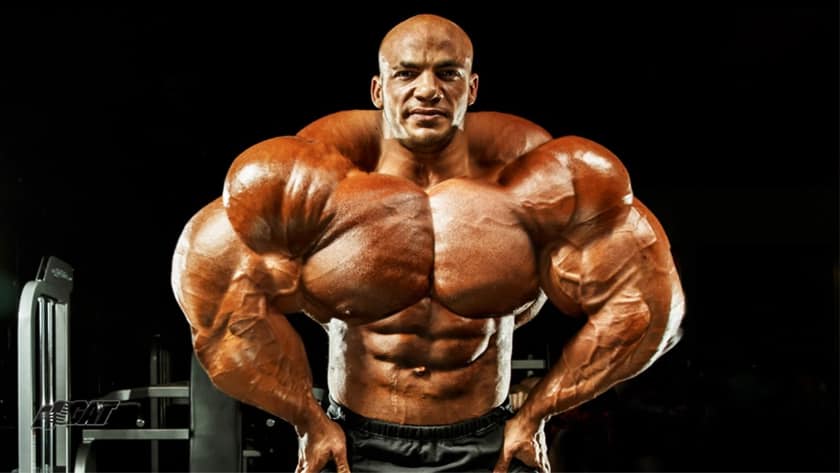 The second biggest bodybuilder of all time is Mamdouh Elssbiay, A.K.A., Big Ramy.

He made his professional debut at the New York Pro in 2013 and won the show.

Since then, Ramy has competed in the top two major bodybuilding competitions, the Olympia and Arnold Classic, continuously, winning the Arnold Classic Europe in 2017, and placing 2nd at the 2017 Mr. Olympia.

He’s not called “Big Ramy” for no reason, as he’s one of the only bodybuilders ever to do battle over 300lbs!

Gregory Kovacs was a Canadian IFBB professional bodybuilder who competed in the sport of bodybuilding from 1996 until he retired in 2005.

Although Kovacs didn’t have the best career in the sport, from a competitive standpoint, he’s widely regarded as the biggest professional bodybuilder of all time!

His highest professional placing was at the 2004 Arnold Classic, where he placed 13th overall.

In the off-season, it’s thought that Kovacs got up to around 420lbs, which is double the weight of an average man.

Greg Kovacs is the biggest bodybuilder of all time.

We hope you enjoyed our list of the biggest bodybuilders of all time.

Hats off to all the guys on the list, as it’s not easy to reach the heights they’ve achieved in bodybuilding.

Here’s a quick recap of the biggest bodybuilders of all time:

The 20 Best Bodybuilding YouTubers of All Time

The 15 Best CLA Supplements to Buy

Matt is a certified digital marketing consultant who's passionate about health and fitness. With almost two decades of lifting experience under his belt, Matt shares his knowledge and expertise with us around bodybuilding and supplementation. Deadlifts and barbell curls are his go-to exercises, and, when he's not writing about health and fitness, you'll find him in the gym busting out some arms!