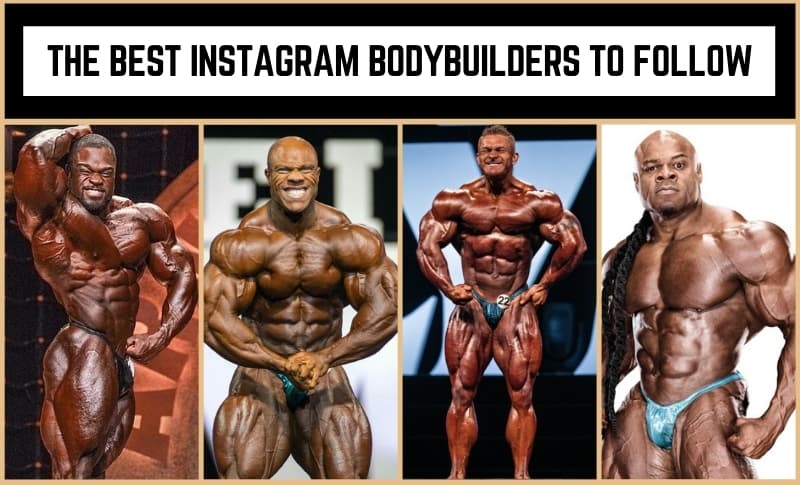 Well, in terms of IFBB Pro Bodybuilders on Instagram, you’ll find the best of the best listed below.

We’ve included both past and present Olympia champions, as well as some of the best up-and-coming bodybuilders.

The list of Instagram bodybuilders and figures mentioned below has been compiled from various web sources, such as Muscle & Fitness & Wikipedia.

Regan Grimes is a professional IFBB Pro Bodybuilder from Canada.

He started training when he was 17 and competed in his first bodybuilding show at 18, turning Pro at 22.

Grimes has placed top ten in competitions like the Vancouver Pro, Wings of Strength Chicago Pro, and the Tampa Pro and has also won several amateur competitions.

Iain Valliere is a Canadian IFBB Professional Bodybuilder who’s gained popularity in recent years due to his size and conditioning.

He’s worked his way up through professional bodybuilding ranks and is now regarded as one of the Olympia stage’s top competitors.

Valliere began training in 2010 and has since won several amateur shows and placed second at the Toronto Pro Men’s Bodybuilding competition in 2019.

Born in Houston, Texas, in 1992, Hunter Labrada is the son of IFBB Pro Hall of Famer, Lee Labrada.

He’s been competing in bodybuilding competitions since 2016 and won his pro card at the Tampa Pro in August 2020, where he took first place.

With over 477 thousand followers on Instagram, professional bodybuilder Sergio Oliva Jr has managed to amass a seriously impressive worldwide following.

Sergio Oliva Jr is the son of the late three-time Mr.Olympa, Sergio Oliva, or “The Myth,” as his fans know him.

Oliva Jr has competed in many bodybuilding competitions throughout his career to date and consistently places in the top ten.

His most recent first-place finish was in 2017, where he won the New York Pro.

The Australian former IFBB professional bodybuilder, and NABBA professional athlete, became one of the youngest men ever to turn Pro at 20.

He has an impressive list of bodybuilding victories to his name, like the 2002 San Francisco Pro, the 2006 Night of Champions, and the 2013 NABBA Mr. Universe, to name a few.

Priest has built almost half a million followers on Instagram and regularly posts entertaining and informative content.

Patrick Moore is an IFBB Professional bodybuilder from Houston, Texas.

He began competing in amateur competitions in 2016, where he won the Mr. Texas State Championship and took first place the following year at the NPC USA Championships.

Moore has since gone on to compete in several professional competitions, including the New York Pro and California Pro, and placed 10th at the 2019, Mr. Olympia.

Steve Kuclo is an American bodybuilder from Detroit, Michigan.

During the offseason, he’s known to weigh in over 300lbs and diets down to a competition weight of around 270lbs.

Kuclo has been competing in bodybuilding shows since 2004, where he won the NPC Capital City Classic and has gone on to work his way up the bodybuilding ranks to take 6th place in the 2019, Mr.Olympia.

You’ll find regular physique updates, training videos, and personal photos on his Instagram, which has over 330 thousand followers.

He became the oldest Mr.Olympia winner ever, aged 43, and has won numerous other bodybuilding titles, such as the Arnold Classic Europe, the Australian Pro, and the British Grand Prix.

Rhoden has a whopping 1.8 million followers on his Instagram, so it’s definitely worth your while checking him out if you’re into bodybuilding.

Dexter, “The Blade Jackson,” is an American IFBB Professional Bodybuilder and one of the best bodybuilders of all time.

The 2008 Mr.Olympia champion has been competing for over three decades and has managed to stay in phenomenal shape throughout his career, even now at 50 years old.

Dexter has won more professional bodybuilding titles than any other bodybuilder in the sport’s history and is a nine-time Arnold Classic champion.

With all those accolades to his name, it’s no surprise that he’s accumulated over 1.5 million Instagram followers!

It can’t be a bodybuilding list without the greatest bodybuilder of all time now, can it?!

Coleman holds the record, tied with Lee Haney, for the most Olympia wins ever and is widely regarded as the greatest bodybuilder of all time.

He made his pro debut at the World Amateur Championships in 1992 and went on to win the most amount of IFBB professional competition titles ever, which was later broken by Dextor Jackson.

Since retiring from the sport of bodybuilding, Ronnie has unfortunately been plagued with injuries and has undergone countless surgeries.

However, despite all that he’s had to endure, “The King” still manages to promote a positive message to his 3.7 million Instagram followers!

Nathan Deasha is an IFBB professional bodybuilder from Liverpool, England.

He’s competed in several amateur competitions and won his pro card in 2014 at the British Championships, making his official pro debut in 2016.

Since his professional debut, Deasha has won the NABBA Mr. Universe, the 2016 Toronto Pro, and the 2016 Lou Ferrigno Legacy, as well as several other NABBA victories.

Nathan has over 255 thousand Instagram followers and posts regular updates about his training, competition prep, and lifestyle.

He made his professional debut at the NPC Arnold Amateurs in 2009 and has since gone on to win several high-profile competitions, and has a 5th place Mr.Olympia title to his name.

Roelly is known for his insane arms and incredible definition.  He regularly posts training pictures and posing videos on his Instagram, which has over 1.6 million followers and is regarded as one of the biggest bodybuilders of all time.

Hadi, “The Persian Wolf,” is an Iranian professional bodybuilder who began his rise to the Olympia stage in 2016.

Hadi was awarded third place in the 2019 Olympia, but his 1.4 million Instagram followers believe he’s got what it takes to become the next Mr.Olympia Champion.

Egyptian IFBB Pro bodybuilder Mamdouh Elssbiay, A.K.A, “Big Ramy,” managed to achieve his impressive physique with only three years of lifting under his belt.

Ramy won his pro card in 2012 by winning the overall title at the Amateur Olympia in Kuwait City, only three years after he started lifting.

He’s known for being a modern-day mass monster and has some of the biggest legs in the sport of bodybuilding.

The Ghanian IFBB professional bodybuilder, William Bonac, is one of the top current athletes in bodybuilding.

Head over to his Instagram if you want to learn more about his lifestyle, training routine, and contest preparation.

Cedric McMillan is an American IFBB Pro Bodybuilder and the 2017 Arnold Classic Champ.

He’s been competing in the sport of bodybuilding since 2008, where he won the NPC Junior USA Championships and has gone on to win some of the biggest competitions in the sport, such as the New York Pro, Golden State Pro, Levrone Pro Classic, and as previously mentioned, the Arnold Classic.

Cedric is yet to place above seventh in the Olympia; however, he has arguably one of the best physiques in bodybuilding currently, so placing in the top five is certainly not unrealistic for him.

If you want to see what Cedrics’ life is all about, check out his Instagram, as he posts content about his day-to-day life, the military, and the sport of bodybuilding.

Kai Greene, or “The Predator,” as he’s known to his fans, is an American professional bodybuilder who’s about as good as it gets when it comes to bodybuilding.

Despite not be crowned an official Mr.Olympia champion, Kai is regarded by many as being one of the best uncrowned Mr. Olympias of all time.

With 6.1 million Instagram followers, you can imagine more than a few of his followers want to see him crowned Mr. O!

Flex Lewis is an IFBB professional bodybuilder from Llanelli, Wales.

After winning seven consecutive 212 Mr.Olympia titles, he is now regarded as the greatest 212lb bodybuilder of all time.

Flex started lifting at home at the age of 12 and then began to take things seriously in the gym at 15.

He started competing competitively in 2003 and has since won more than 28 contests, including seven 212 Mr. Olympia titles and one 212 Arnold Classic.

Flex has recently announced that he will compete in men’s open bodybuilding and do battle at the 2020 Olympia.

He’s not called “The Gift” for any old reason.

Since he began his bodybuilding career in 2002, Phil has won countless contests and is currently tied joint-second with Arnold Schwarzenegger for the second most number of Mr. Olympia wins of all time.

If he wins this year’s Olympia, he’ll tie Lee Haney and Ronnie Coleman with most Olympia wins ever.

So, if you want to watch his progress towards his eighth Mr.Olympia title, then head over to his Instagram.

Brandon Curry is an American IFBB professional bodybuilder and the current Mr.Olympia champion.

He turned Pro in 2003 after winning the Supernatural Bodybuilding competition.

Throughout his career, Brandon has also won many other competitions alongside the Olympia, such as the Arnold Classic, New Zealand Pro, and the Toronto Pro Supershow.

Curry is getting ready to defend his crown at the 2020 Mr.Olympia, where he’ll do battle with some of the biggest and best bodybuilders of this generation.

Although we’re not big fans of Instagram ourselves, it does allow us to get a glimpse into how the best bodybuilders in the world live their lives and lets us stay up to date with their progress leading up to the Olympia.