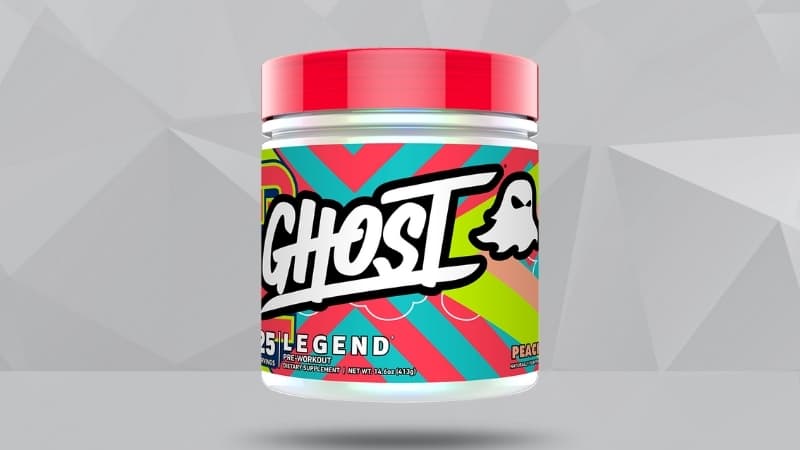 This is our Ghost Legend review for V2 of their pre-workout product.

Ghost Lifestyle is one supplement company that has its branding absolutely on point. The congruency, the simplicity, and the use of bright colors are all well-coordinated and have helped them become a very popular brand in the space.

But do their products live up to the same level of detail and attention?

Ghost Legend is a pre-workout supplement, and Ghost’s flagship product. It was originally released in 2016, however has recently been updated with a V2 formula.

This is the formula we’ll be reviewing today in this article. GHOST Legend V2 Pre Workout Supplement (25 Servings)
$44.99 ($3.00 / Ounce)
Check Price on Amazon
We earn a commission if you click this link and make a purchase at no additional cost to you.

Ghost are well known for their clean and colorful branding, but they’re also known for the vast range of flavors they offer their products in. Legend is no exception to this, but how does their formula stack up?

This is our Ghost Legend Pre-Workout review, where we’ll be discussing the following:

Before we get into the big stuff like the ingredients, prices, flavors, and effectiveness; let’s quickly cover some important information on servings, product weight, and potential supplement stacks.

A single tub of Ghost Legend has a net weight of 400g and contains 25 servings. A pretty typical number of servings for a pre-workout product.

One scoop of Ghost Legend is equal to roughly 8g, and Ghost recommends 2 scoops per serving.

There aren’t any suggested products to stack Ghost Legend with on their website, however, you could potentially stack it with their Pump and Size supplements. 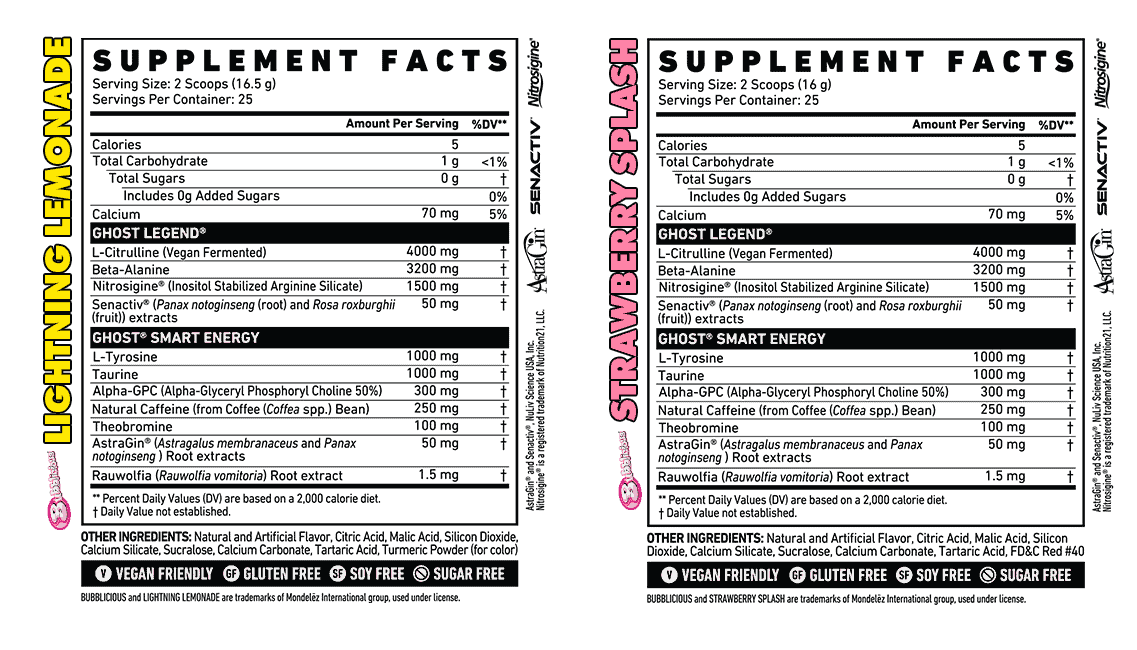 Let me start by saying that the V2 formula definitely seems to be an improvement over the old formula. The dosages have been increased so that we’re getting close to the ‘clinically effective’ dosages for these ingredients where applicable.

The total serving size is 16g or 16.5g depending on the flavor variety, and this is equal to two scoops. Legend’s old formula was only 12g per serving, which is a good indication that some valuable improvements have been made.

Here’s a full breakdown of Legend’s ingredients and dosages:

L-Citrulline is probably the second most popular pre-workout ingredient, with caffeine being the king. It’s been studied for its potential benefits in improving nitric oxide levels in the muscles, boosting strength, and reducing fatigue.

Whilst it’s often included in supplements as citrulline malate, a compound combining L-citrulline and Malic acid, companies often do this to inflate the total quantity next to “citrulline” on their labels.

4000mg is a ‘clinically effective dosage’, with 3500mg being the lower line. However, this dosage most likely wouldn’t be considered optimal by any means.

Beta-Alanine is a very common ingredient used in pre-workout products for its ability to increase carnosine concentration levels in muscle tissue.

However, what most people don’t realize is that the studies state that a “loading phase of beta-alanine supplementation is essential for increasing carnosine levels”.

The loading dosage is 179g over a 28 day period, which means you’d need to consume roughly 6g of beta-alanine a day for 28-30 days to see the desired effects (2.85% median performance increase).

Most pre-workouts will include between 2g – 3.2g of beta-alanine, which means you’d have to either take a pre-workout 2-3 times a day or buy beta-alanine by itself.

Either way, despite popular opinion, this doesn’t make it a very good pre-workout ingredient. All the itching and flushed skin, without any of the desired benefits.

Nitrosigine® is a patented compound that has been researched to aid in boosting nitric oxide levels and blood flow. This is an ingredient that may aid in improving muscular pumps when exercising.

Senactiv® has shown in a human clinical study that it can actually promote the removal of old cells and replenish with new healthy muscle cells.

L-tyrosine is a cognitive enhancer that may help boost concentration, and also present a sense of calm. It’s often used in pre-workout supplements to help negate the negative side effects of caffeine.

1000mg is a standard dosage, and if I’m correct in thinking, this is double the content in their original formula.

Taurine is a controversial pre-workout ingredient. It’s found naturally within the body and helps to regulate the body’s immune system, minerals, and hydration levels.

However, it also has anti-inflammatory properties, and whilst that’s a good thing in a lot of ways; in the gym, it may be canceling out a lot of the other ingredients you’re taking.

Alpha-GPC is well known as a potential cognitive enhancer and may well help aid the ‘focus’ element of a pre-workout. Some studies suggested that a dose of 600mg – 1200mg may be required to feel the effects of Alpha-GPC. However, pre-workout supplements containing this ingredient will normally not reach that amount.

The caffeine content has been increased from 165mg to 250mg, which is a huge improvement and will most likely make a big difference to the overall effectiveness of the supplement.

Theobromine is found naturally in cocoa and chocolate and is considered a stimulant. However, due to its nature, it doesn’t present side effects such as jitters which may make it useful as more of a cognitive enhancer.

AstraGin® is a patented natural compound that may aid in the absorption of nutrients. It’s used in supplements to potentially help you get the most out of all the other ingredients.

Rauwolfia is a group of plants that contain more than 30 chemical compounds. Two of these are Rauwolscine and Yohimbine, which are relatively new to the pre-workout industry.

The downside of using Rauwolfia instead of a specific compound like Rauwolscine or Yohimbine is that you’re unable to tell which of the 30 odd compounds has been used.

As I mentioned in the intro, the flavor and branding are where Ghost shines. They regularly team up with popular candy brands and license the use of their flavors and logos. Some of your favorite candies from when you were a kid are among the options.

Here’s a list of all the current flavor options for Ghost Legend V2:

GHOST Legend V2 Pre Workout Supplement (25 Servings)
$44.99 ($3.00 / Ounce)
Check Price on Amazon
We earn a commission if you click this link and make a purchase at no additional cost to you.

Now we’ve covered all the important information about the product itself, let’s talk about the cost.

The price of Ghost Legend is $44.99 for 25 servings on their official website, but almost $70 on Amazon as of writing this. Given the updated formula, their price is not too bad, but maybe still slightly on the expensive side.

Don’t forget that branding is Ghost’s arena, and the licensed flavor options they sell their products in are a big cause for the price being higher.

Where can you buy Ghost Legend?

You can buy Legend on their official website, or on Amazon.

Now let’s be honest here, as that’s what we’re all about.

It was extremely underdosed, and the reviews proved that point. Hence the reason why a V2 was developed.

The caffeine content is probably one of the biggest changes, moving from 165mg to 250mg. That’ll do nicely.

The L-citrulline dosage at 4g is within the normal range, but still a little on the low side.

Beta-alanine is dosed at the ‘optimal’ quantity, but my opinion still stands that it’s a poorly chosen ingredient for pre-workouts, unless you take pre-workout every day and supplement with an additional 3g extra beta-alanine per day.

Overall, the new formula is a big improvement, and you can expect to see a good increase in energy, focus, and pump.

So where does Ghost Legend stack up as a pre-workout?

Their new formula is definitely worth giving a try. Ghost has always marketed itself as a lifestyle brand, and they’re not necessarily striving to create the strongest pre-workout formula possible. Their original formula didn’t hit the mark, but this one is definitely worth testing out for yourself.

In my opinion, I’d remove the beta-alanine, and focusing on increasing the L-citrulline content.

Overall, with the licensed flavor options, you know you’re going to be getting an amazing tasting product, they’re fully transparent with their labels, and this formula is a big improvement over the original.

What do you think about this Ghost Legend review? Leave a comment below.