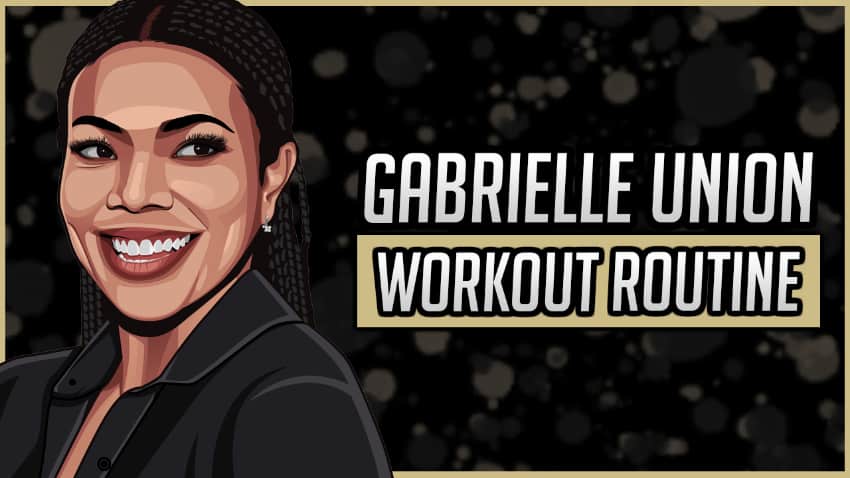 Gabrielle Union is an American actress who was born on the 29th of October, 1972. Union started her acting career in the 1990s, by appearing on different sitcoms, before landing a supporting role in the film ‘She’s All That’ and ’10 Things I Hate About You’.

She is best known for performances in the movies ‘The Brothers’, ‘Deliver Us from Eva’, ‘Daddy’s Little Girls’, and ‘Think Like a Man’.

In 2013, Union starred in the leading role in the series ‘Being Mary Jane’, for which she has received an NAACP Image Award.

She has written two autobiographies named ‘We’re Going to Need More Wine’, and ‘Welcome to the Party’. Outside acting, Union has been an advocate for issues involving women’s health and violence against women. As of this year, she was featured on Time’s list of the 100 most influential people.

Union has been open about the hard work she’s been putting inside and outside the gym to maintain her great body.

Her workout routine features a lot of butt exercises such as lunges and squats. When Union workout she keeps a resistance band in her backpack and she brings this to work every day. She can perform side shuffles and leg lifts by having a resistance band.

She has stated:  I have a family history of diabetes, high blood pressure, and high cholesterol, and I know that can lead to an early death. I want to be a vital and energetic part of my family for a long time, not to be a big mama in a rocking chair in the TV room, or huffing and puffing just going upstairs.

Gabriell Union has shared her training videos on social media such as Instagram. She likes to perform a mix of full-body compound exercises that targets the muscles at once.

Union normally goes up early in the morning to get her first training session done. By hitting 15 to 20 minutes of cardio daily, Union credits her toned body to a regular combination of strength training and Pilates. She always makes sure to perform her cardio as well as Pilates and strength training.

Union likes cardio and tries to hit cardio as much as possible each week. Down below we will see some of her best exercises and workout routines.

When it comes to her diet she follows an “almost vegan diet” meaning that she eats more vegetables than eating meat. She has revealed in an interview that she also has avoided products such as gluten, soy, and dairy.

She loves to consume carrot, beet, and kale which is also good for the skin. Union enjoys sticking to a healthy diet plan and during the week when she is working she makes sure that she eats healthy fats and gluten and dairy-free.

She stated: I just stay active, and not let it get too out of control. I eat more vegetables, and just as I love the occasional rib-eye steak, I do try to cut down on the actual portions.”

Gabrielle Union is an amazing American actress and former model who has appeared in several movies. She has established herself to be one of the most successful actresses in Hollywood. She was born in 1972, in Nebraska and she was raised in a Roman Catholic household.

When she was younger she struggles with self-esteem and she had problems with her mental healthy describing her as a “mean” person. As of today, she is one of the richest actresses and she is a true inspiration.

Union has starred in multiple movies and series throughout her career such as ‘The Brothers’, ‘Think Like a Man Too’, ‘City of Angels, ‘Bad Boys II, ‘Cradle 2 the Grave’, ‘Neo Ned’, ‘Cadillac Records’, ‘Top Five’ and ‘Breaking In’.

What do you think about Gabrielle Union’s workout routine and diet? Leave a comment below.