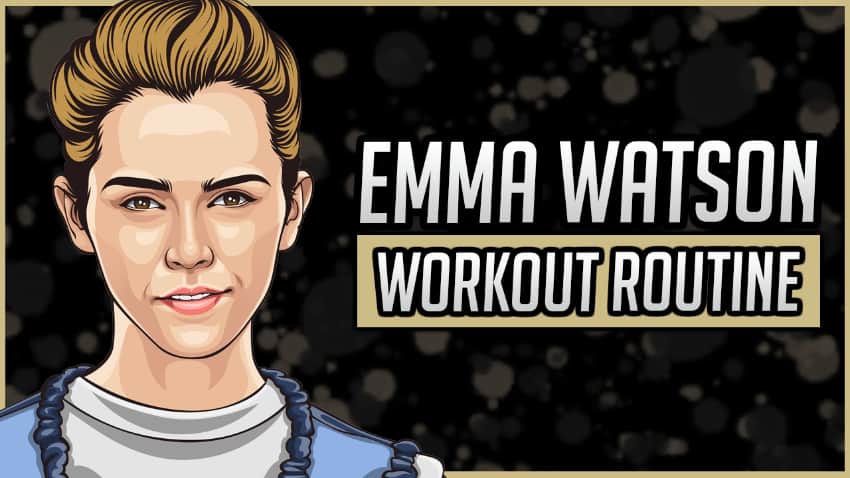 Emma Watson is an English actress who attended the Dragon School. Watson rose to fame with her first acting role as Hermione Granger in the Harry Potter series.

After the last Harry Potter film, she starred in movies such as ‘My Week with Marilyn’, ‘The Perks of Being a Wallflower’, and ‘The Bling Ring’.

Between the years 2011 to 2014, she split her time by working on films and continuing her education. In 2014, she graduated from Brown University with a bachelor’s degree in English literature. The same year, Watson was honored by the Britsh Academy of Film and Television Arts, winning British Artist of the Year.

She is also known for being a humanitarian she was appointed as a UN Women Goodwill ambassador and helped to launch the UN Women campaign ‘HeForShe’.

Emma Watson’s workout routines feature a lot of cardio such as sprints and Pilates. She tries to lift weights 3 times a week.

When it comes to her diet she likes to eat healthy and clean food. When she has her cheat meals she enjoys eating chocolate, pasta, and bagels. She has long refused to eat processed foods. By avoiding processed foods it ensures that you almost always eat nutritious foods that favor the proper functioning of your body.

Emma Watson tries to change her workout routine as much as possible to not get bored. Watson likes Pilates and yoga and this routine helps her to regain her inner focus.

When she wants to push herself she likes to improve her cardio. Sometimes she hits boxing as well and this helps her to get her heart rate up.

Her personal trainer has revealed that her workout routine is based on three basics: stretching, strength, and stillness. The reason she likes to hit the stillness section is that it reduces stress hormones in our bodies and it brings our mind back into balance.

Each exercise starts with stretching and to get the most out of it she stretches her upper body first. She likes to hit exercises such as squats, lunges, and steps, followed by 6 minutes of stability exercises with a pilates ball.

Emma Watson’s postural correction is very important and she normally focuses on different stretches and exercises to help her to stay in her best shape. The stretches that she performs include her shoulders, quads, and hip flexors.

Emma Watson focuses on eating fresh foods that are low in fat and salt. Watson tries to avoid junk food and her diet features fruits, salads, meats, and fresh vegetables. When it comes to her cheating days she eats pasta, bagels, and chocolate.

She loves to add Omega 3 supplements, which is known for reducing inflammation and helps against heart diseases. She also likes to consume Vitamin C, which helps our immune system.

Emma Watson is an amazing actress and she puts a lot of effort into her diet and workout routine. She does whatever makes her feel good when it comes to her fitness life. Watson rose to fame at a young age when she starred in the Harry Potter movies.

She has four siblings and she first realized that she wanted to become an actress when she was about 6 years old. When she was 9 years old she got her first major acting assignment by portraying the role of Hermione Granger in the Harry Potter films. She had never starred in a movie before and she did an outstanding performance.

Don’t forget to share this article if you’re an Emma Watson fan.

What do you think about Emma Watson’s workout routine and diet? Leave a comment below.