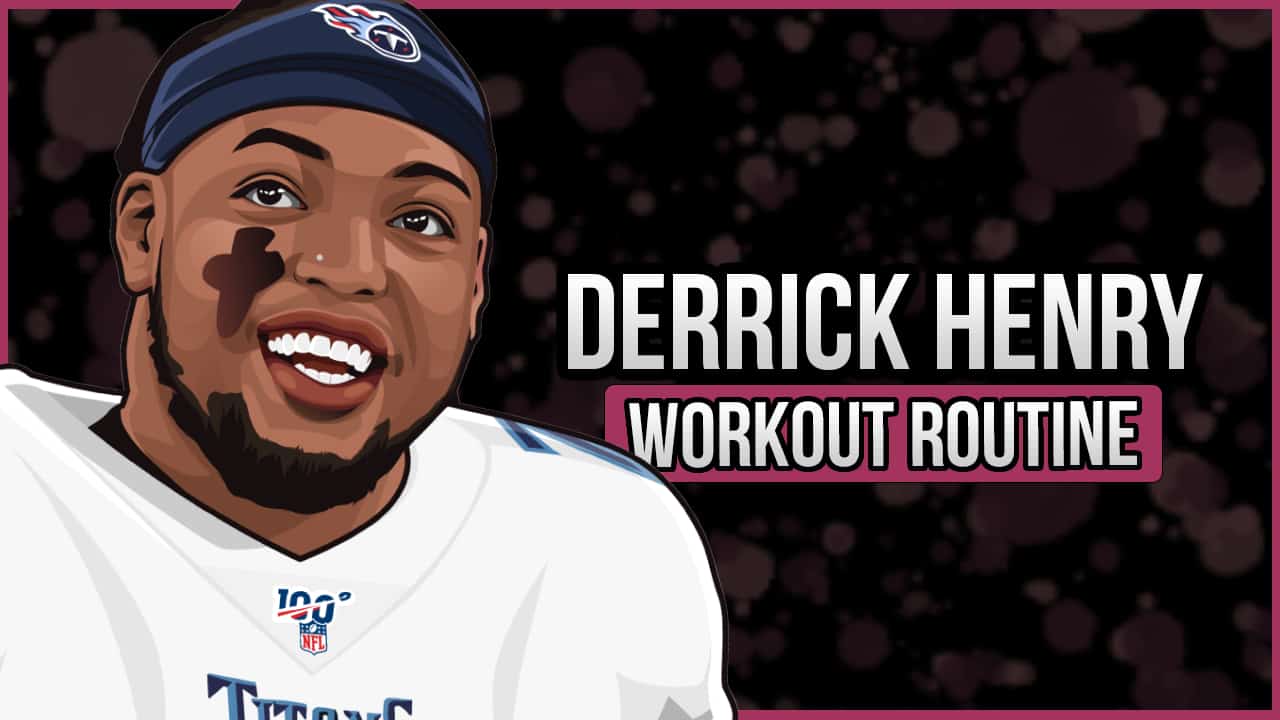 Derrick Henry is an American football player; he’s a legendary Tennessee Titans running back and one of the best the NFL has ever seen.

In the off-season, Henry trains just as hard (if not harder) to maintain his physical stature and fitness level.

Derrick Henry is much larger than the average running back in the NFL. Because of his size, he has to work hard to improve and maintain his strength, foot quickness, agility, and acceleration to succeed in the league.

While we’ve done thorough research on Derrick Henry, this article is not his exact routine.

It’s a compilation of interviews he’s done, feedback from his trainers and coaches, and information from his social media profiles.

Since his level of fitness has a great influence on his performance as a Tennessee Titans player, Henry takes his workouts very seriously.

To concentrate on building strength and power, Henry focuses on low reps when he’s lifting heavy weights in the gym.

On his official Instagram account, Derrick Henry shares his go-to workout routines and how he finds inspiration and motivation in the gym and on the football field.

Derrick Henry earned the nickname “King Henry” because of his impressive rushing game; in 2020, he rushed over 2,000 yards in a single season.

These achievements are a testament to his hard work, focus, and physical fitness. In the off-season, Henry does a significant amount of uphill sprint work.

Leading up to training camp and before OTAs start, Henry focuses heavily on his footwork and increasing his speed and agility. Sprint training builds muscular endurance and activates the entire body.

Derrick also lifts heavy weights in the gym and prefers bench press and squats to train his lower body.

On Monday, Derrick Henry works his lower body in a heavy workout to maintain his incredible physique.

His strength training routine is designed to build strength and muscular endurance.

On Tuesday, Henry performs footwork drills to keep himself sharp and fresh on the football field. He warms up with some work on the elliptical and then performs uphill speed drills.

On Wednesday, Derrick Henry trains his upper body with a few exercises that are designed to build muscle.

Henry can lift up to 350 pounds in a power clean and can bench press over 440 pounds.

On Thursday and throughout the week, Derrick performs sprint work on an uphill incline. He runs with the football and then does 20-yard sprints uphill.

After his lift session, he makes sure to stretch by doing light yoga and may take an ice bath to give his body some extra TLC.

On Saturday, Derrick Henry enjoys an active recovery day where he may do some yoga and stretching or take a walk outdoors.

Derrick Henry takes a break from speed training and strength workouts on Sunday to give his body a break.

For recovery days and post-games, Derrick gets in the hot tub, then the cold tub, dry needling, and some active release therapy (ART) to get his body back on track, prevent injury and release any tension or soreness.

Derrick Henry eats nearly 3,500 calories per day and focuses on low-carb, high-calorie foods that fuel his workouts and leave him feeling satisfied throughout the day.

Additionally, Derrick Henry tries to drink a gallon of water a day, if not more. He drinks a lot of milk to prevent injury and keep his bones strong.

In the off-season, Henry may be focused solely on cutting fat and building muscle, so he eats accordingly for his current goals. He loves fresh fruit, particularly bananas, and tries to eat it with every meal.

He works with a chef and the Titans’ dietician to ensure he’s meeting his caloric needs through food. Although Henry has a calorie goal to meet each day, he isn’t afraid of a cheat meal because of the amount he burns during each workout.

When he’s in training camp or working out at home, it’s likely that the Tennessee Titans running back takes a few supplements to power his workouts.

Here are the supplements Derrick Henry may take:

Derrick Henry is proof that hard work and passion can get you pretty far in life, but determination and dedication will help you cross the finish line to success.

We expect to see Henry lead the Tennessee Titans to an AFC Championship in the next few years. From his unstoppable rushing abilities to his training in the off-season, nothing can stop him.

He’s one of the strongest running backs the NFL has ever seen, and we’re confident that the Derrick Henry workout routine will get you on the fast track to building the body you’ve been working towards.

What do you think about Derrick Henry’s workout routine and diet? Leave a comment below.