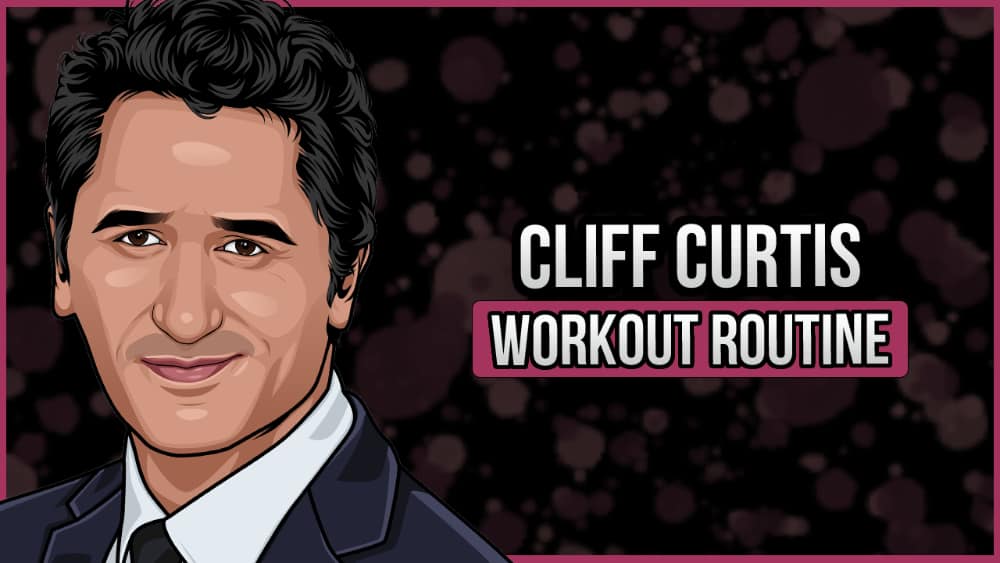 Cliff Curtis is a New Zealand actor best known for his roles in Fear the Walking Dead, Blow, Training Day, Live Free or Die Hard, Doctor Sleep, Avatar 2, and The Dark Horse, just to name a few. He’s also the co-owner of the independent New Zealand production company Whenua Films, where he works as a producer on short films.

Curtis may be in his 50s, but he’s in incredible shape and works hard in the gym to keep his physical stature looking strong and lean for any films he may be in.

While we’ve thoroughly researched Cliff Curtis’s workout routine and diet plan, this post does not contain his exact routine. It’s a compilation of his social commentary, interviews he’s done, and information from experts in the industry.

As a child, Cliff Curtis grew up studying mau rākau, a traditional Māori form of taiaha fighting. He also studied breakdancing and danced in rock ‘n’ roll dance competitions as a young adult.

Curtis has been in great physical shape for most of his life, thanks to his upbringing in New Zealand.

As an adult, he stays in shape by keeping busy with his career and four children, making a conscious effort to be active throughout the day, and hitting the gym as much as his busy work schedule allows.

Cliff Curtis is naturally tall and lean, and he relies on cardio and strength training to keep him feeling and looking his best. He aims to work out 4 days a week and tries to mix in time with a trainer when it’s necessary for a role.

Cliff starts off the week with a long run to clear his head and get him in the zone for the workweek. He heads to the gym to get on the treadmill or goes outside for a 5-mile jog.

Cliff rests on Wednesday to spend time with his family and let his body recover from his workouts.

If time allows, Cliff Curtis spends time outdoors on Thursday by going on a hike with his wife and children.

On Friday, Curtis performs a lower body strength program to work on building the foundational strength in his legs and glutes.

Training the lower body is crucial for building foundational strength to run faster, jump higher, climb stairs, and more. Here’s a strength training program he may do:

Cliff dedicates his Saturday workout to his core. Here’s an ab burner he may do:

Curtis takes another rest day to stretch, help his muscles recover with a light foam rolling session, take a low-impact walk outside, and spend the day with his family.

While he enjoys spending time in the gym, Cliff Curtis knows how to prioritize fitness and his family, giving enough of his time and energy to both.

The New Zealand actor pays special attention to his diet and ensures that he eats mostly healthy throughout the week.

Curtis knows the foods he eats can play a role in slowing down age-related changes to his body, like a slowing metabolism, loss of muscle mass, and a decrease in bone density.

Whether he’s bulking and trying to add lean muscle for Avatar or burning fat and building muscle for a different role, Curtis uses supplements and vitamins to help support his fitness goals.

Here are a few he is likely to use while training for a role:

Cliff Curtis is one of the trimmest guys in Hollywood, and he works hard to maintain his lean stature while also raising young children and working on various projects with his production company.

His most successful films are the ones he can fully immerse himself in, like his fan-favorite character in Fear the Walking Dead.

Cliff Curtis’s career thus far has been really impressive and we know his talent will take him far, with many successful films released in the future. We’re excited to see him cast in the upcoming Avatar series, and all his future work and endeavors.

What do you think about Cliff Curtis’s workout routine and diet? Leave a comment below.