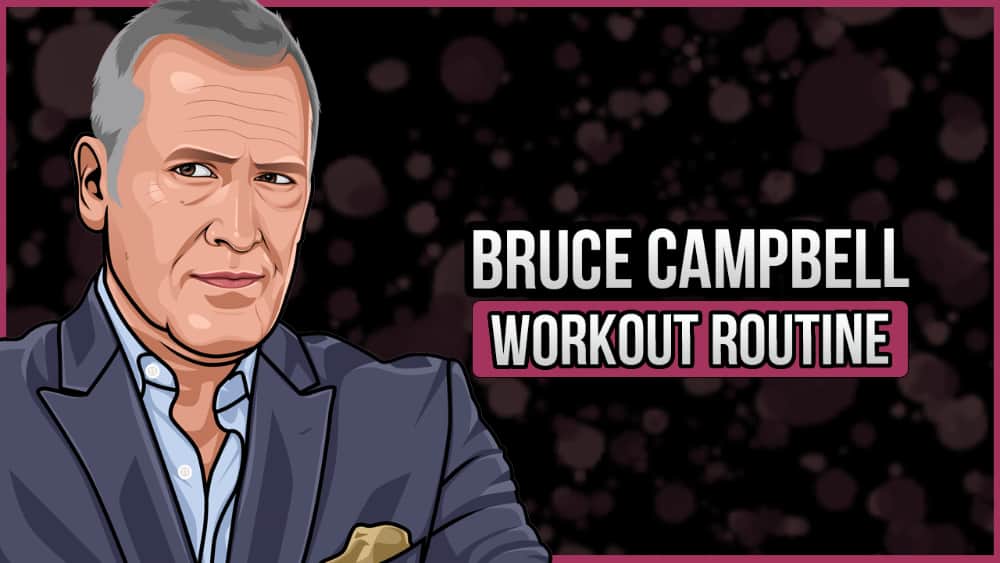 Bruce Campbell is an American actor, writer, producer, and director who is best known for his role as Ash Williams in the supernatural comedy franchise The Evil Dead in 1981, directed by Sam Raimi. He reprised the role in Ash vs. Evil Dead, the 2015 horror-comedy series that aired for three seasons.

Bruce has done a lot of voice-over work, including characters in Cloudy with a Chance of Meatballs, Spider-Man: The Movie, Evil Dead: Regeneration, and more. He’s a published author as well.

While his Evil Dead days may be over, there’s a lot he had to do to get back into fit shape for the TV series. He was older and had to retrain his body to be physically fit to fight evil like Ash Williams. This post contains some of Bruce Campbell’s workout routine and diet plan to get back into his role as the hero, Ash Williams.

When he rose to stardom in the 1980s, Bruce Campbell flourished in his role as Ash Williams because he represented the modern-day man; not overly chiseled, but not chubby either. He wasn’t a bodybuilding stud, he was a regular guy that had to save the world with the skills and instincts he was born with.

As he’s prepared for roles throughout his career, Bruce Cambell doesn’t go crazy with workouts or put too much pressure on himself to look a certain way. His character allows him to appear like an average Joe, so more people can relate to him and build a connection with his character.

As an Oregon resident, Bruce Campbell enjoys exploring the great outdoors and uses this time as exercise and training. He loves to hike, run outdoors, and explore his home state.

He does some light weightlifting to tone up once or twice a week and swears by stretching to keep his joints moving smoothly and to avoid injury.

Bruce Campbell starts the week with an hour-long hike. Oregon, where Bruce lives with his wife, has stunning views and great weather in the spring and summer months, so he enjoys spending as much time outside as possible.

Bruce hits the weights on Tuesday to work his upper body, maintain muscle mass, and burn fat. Here’s a strength training workout he likely does:

Bruce rests on Wednesday and spends time with his wife. Rest days are arguably just as important as workout days; it’s essential to let the body recover from intense workouts and, for older people, to let the muscle tissue repair itself.

On Thursday, Campbell heads out for a long run in the Oregon sunshine. Running is an effective method to relieve stress and helps Campbell clear his head. After his run, he spends 10-15 minutes working with a foam roller and doing some light yoga to keep his muscles flexible and to maintain their range of motion.

Bruce Campbell takes another day of rest on Friday to recover from his long run and to give his muscles some much-needed rest.

Bruce Campbell heads back out on Saturday for another hike to maintain his Ash Williams-inspired physique. He typically aims to walk between 3 and 5 miles, which takes around 2 hours. He tracks the distance and calories burned on his fitness tracker.

If he’s feeling up to it, Bruce Campbell does another strength training session to finish off the week. He uses lighter weights and high reps to keep his heart rate up for a great burn.

While training for his role in the spy movie Burn Notice: The Fall of Sam Axe, Bruce adjusted his diet quite a bit to drop some pounds and get back into shape. He did the same thing for all of the Evil Dead movies as well. He began eating less meat and focused on colorful vegetables, grains, and healthy fats.

As a guy, Campbell knows the best ways to train his body and mind away from eating junk. He gave up bagels and cream cheese to cut excessive carbs from his diet. He starts his morning with coffee and stretching.

To maintain his muscular physique and stay in shape, Bruce Campbell likely takes a few vitamins and supplements. These will keep him energized and focused, help his muscles recover, and help his body burn fat.

Whether he’s fighting Deadites in Evil Dead as Ash Williams or fighting the darkness of evil in other ways, Bruce Campbell is a hero in his own right.

Campbell has been the king of the horror-comedy genre for the last 30 years, with nearly every character he’s taken on being crazier than the last. His fanbase is loyal to a fault, and he’s built a career and a legacy to be proud of.

What do you think about Bruce Campbell’s workout routine and diet? Leave a comment below.