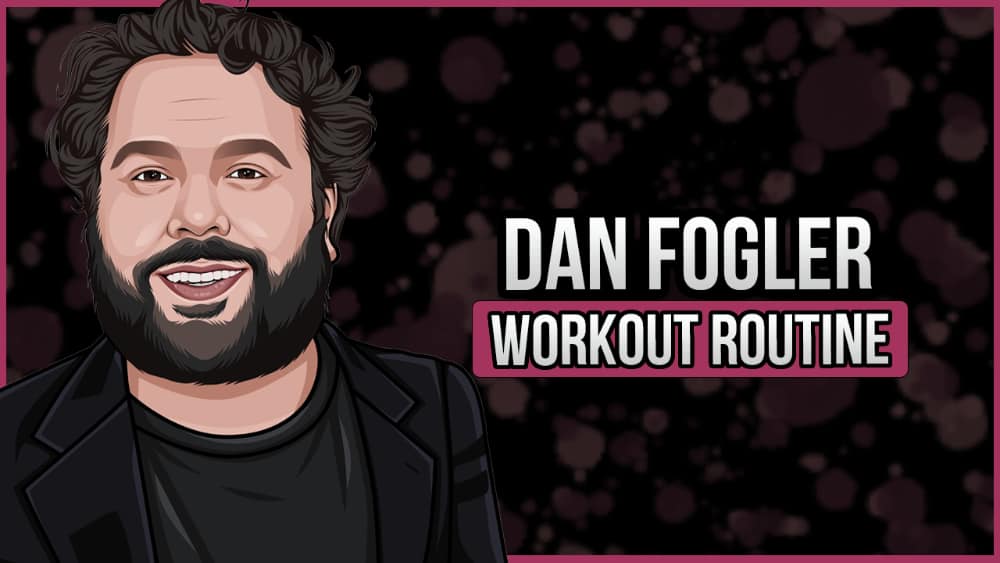 Dan Folger is an American actor, comedian, and writer. He’s best known for his role as Jacob Kowalski in Fantastic Beasts and Where to Find Them and on the hit TV series The Goldbergs, where he plays the beloved Uncle Marvin.

Aside from being a famous comedian and actor, Dan Fogler’s weight-loss journey has been one worth paying attention to. We’re thrilled he’s getting healthier and has been so open at sharing his weight-loss secrets.

While we’ve researched Dan Fogler’s workout routine and diet plan, this post does not contain his exact routine. Instead, it’s a compilation of his social commentary, interviews, and information from experts in the fitness industry.

Between filming the Fantastic Beasts film in 2018 and now, Dan Fogler has lost over 100 pounds. This significant weight loss occurred once he turned 40 and his cholesterol levels skyrocketed, his metabolism slowed, and he kept gaining weight.

Turning 40 was Dan’s wake-up call. He realized he needed to get his health in check so he could be around to watch his children grow up without missing any important moments because of his health.

Not much of an athlete growing up in Brooklyn, Dan Fogler was more of the nerd-type and didn’t find his love for exercise until he was in his 40s.

Dan’s weight loss journey is pretty incredible; from a few days a week of regular exercise and adapting to a healthy diet, a lot of his weight loss happened naturally. He dropped 60 pounds simply by changing his diet.

Once that initial weight was off, Dan Fogler began focusing on finding workouts that made him feel strong and capable, so he could lose more fat and start building muscle. His favorite workout routine may surprise you, so keep reading to discover what he does consistently to build strength and reduce cardiovascular risk.

Dan Fogler discovered his love for karate during his weight-loss journey. Karate is an excellent sport for weight loss; there is a great variety of movement, discipline, and strength training in the sport, which helped Dan lose over 40 pounds in recent years.

Dan also discovered his love of low-impact cardio exercise as he continued losing weight and getting healthy. He began taking daily walks to relieve stress and wind down from the day.

Dan tries to get out and walk at least twice a week. If he’s in a pinch, he may get on a treadmill at a local gym to get some exercise, but he prefers to be outdoors.

Dan Fogler takes Wednesday off to rest, let his muscles recover, and relax. While his body has become accustomed to his new fitness routine, he still needs to give his muscles adequate time off to recuperate. He may perform some light stretching, foam rolling, or yoga to let his body recover.

Dan Fogler completes another karate class on Thursday. He claims his newfound fitness routine has added years to his life, partially thanks to his consistent karate workouts.

Karate forces the muscles into a high-intensity workout, with quick movements including sparring, kicking pads, and shadowboxing. Karate helps the body burn fat by making its metabolism work faster.

To end the week, Dan Fogler takes another long walk outside to get his heart rate up, burn some calories, and relieve any stress.

Spending time outside can be more beneficial than we realize, from boosting your mood to an effective way to clear your head and increase energy levels. There’s no doubt that Mother Nature has a powerful effect on our mental and physical state of well-being.

Dan Fogler rests on the weekends, hangs out with his kids and wife, and gets ready for the upcoming week.

As his children get older, he realizes how little time he has with them before they are grown and off pursuing their dreams. So spending time with his kids while they’re around is extremely important to Dan.

As he worked toward his weight-loss goals, Dan Fogler knew diet would be the biggest change he’d have to make. So he gave up fried foods, processed foods, and all the junk he’d been eating for most of his life. He eliminated bread, sugar, and soda immediately.

Dan focuses on eating more vegetables and more fruit, complex carbs, and healthy fats to create a better diet plan and consistent habits for himself.

Dan Fogler incorporated a few supplements and vitamins into his diet to help him lose weight, keep his immune system healthy, curb cravings, improve his focus, and boost his energy while working out.

For Dan Fogler, weight loss is just one part of his story as an actor, a father, and a comedian. He has graciously shared so much of this journey with his fans, who originally shared concern when they saw how much weight he’d lost.

His fans have been very supportive as they watched Dan Fogler lose weight, get healthier, and discover his new passions and abilities outside of any acting work.

Whether you’re on a weight-loss journey or a fan of Dan’s acting or comedy, everyone can agree that Dan Fogler looks fantastic, healthy, and happy. We wish him all the best!

What do you think about Dan Fogler’s workout routine and diet? Leave a comment below.