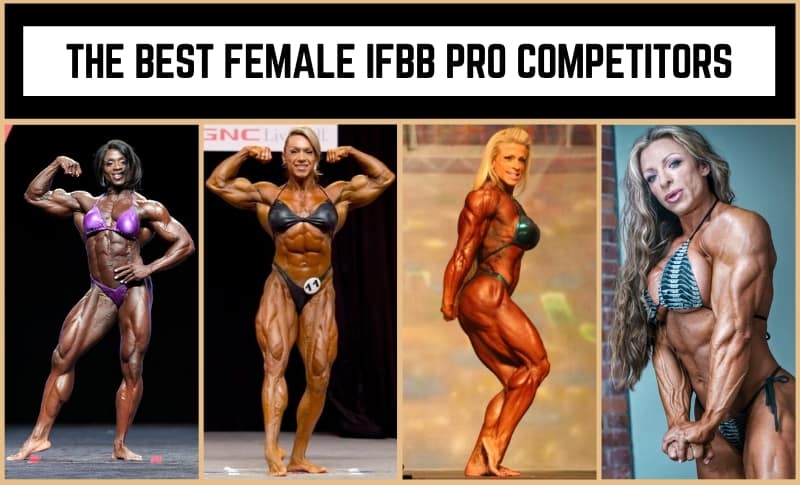 Who are the best female IFBB Pro competitors?

One particular lady is even the most successful bodybuilder of all time, beating the likes of Ronnie Coleman and Dexter Jackson.

So, without further ado, here’s a list of the 20 best female IFBB Pro competitors.

The list of female IFBB Pro competitors and figures mentioned below has been compiled from various web sources.

These are the best female IFBB Pro competitors:

Nicole Ball is a Canadian professional bodybuilder who won her pro card in 2004.

Before turning pro, the six-time Olympia athlete was undefeated in her weight class for seven years in her home country.

Since then, she’s qualified for the Olympia every year and consistently placed top four in all her bodybuilding shows.

She competed as a professional powerlifter for almost six years and won the world championships with the AAPF.

After accomplishing everything she wanted in powerlifting, Kim started bodybuilding, gaining her IFBB pro card in 2005.

On stage, Kim weighs in around 138lbs at 5’5,” and since starting her bodybuilding career, she’s managed to establish an impressive IFBB record over the years.

Canadian-born professional bodybuilder, Melody Spetko, started her bodybuilding career in 2005 and won her pro card in 2010, just four years after beginning the sport.

She competed professionally at the highest level for approximately four years in competitions like the IFBB PBW Tampa Pro Championships and the Canadian Championships.

Melody now coaches and preps other female bodybuilders to help them achieve their professional bodybuilding goals.

Janeen Lankowski began her professional bodybuilding career in 2011 after winning her IFBB pro card at a bodybuilding competition in Cleveland, Ohio.

Up to turning pro, Lankowski competed in several major bodybuilding competitions, placing first and second in many of them.

Her success led to sponsorships with companies like Sun Magic Salons, and Janeen now spends her time helping others achieve their fitness goals and life ambitions.

Maria Rita Bello is an IFBB professional female bodybuilder who’s built a strong reputation as a top contender in the sport of bodybuilding.

She’s competed and placed top ten in the most significant bodybuilding competitions on the planet, like the women’s Arnold Classic, Tampa Pro, and the Chicago Pro.

She won her pro card in 2011, competed in her first professional show in 2012, and qualified to compete in the biggest show in female bodybuilding, Ms. Olympia, in 2014.

She made her professional debut in bodybuilding at the Jan Tana Classic in 2003 and has since become the 2019 Rising Phoenix World Champion.

On stage, Trevino competes around 158-174lbs and gets up to almost 180lbs during the offseason.

Kim Buck is an IFBB female bodybuilder who’s been competing professionally since 2012.

She’s competed in several high-profile competitions, like the Arnold Classic, Tampa Pro, and Toronto Pro, where she placed top ten in everyone.

Before she turned pro, Buck overcame a life-threatening car accident that left her unable to walk.

She began lifting weights as a form of rehabilitation and became one of the best IFBB pro competitors of all time.

Like many female bodybuilders, Debatin started her career as a powerlifter and was known for squatting 265lbs and benching 235lbs, all while weighing only 120lbs.

Debatin is the only athlete to have ever qualified for Ms. Olympia for three consecutive years.

She began competing in women’s bodybuilding competitions in 2007, the Gopher Classic being her first show, and later went on to win shows like the Ronnie Coleman Classic, the Europa Super Show, and the Lone Star Classic.

As a certified personal trainer, Sarah continues to train clients in gyms, homes, and schools across her state to help them achieve their fitness goals.

Cathy made her professional debut at the Jan Tana Classic in 1995 and competed on stage at around 155lbs.

Over the years, Cathy placed top ten in several major bodybuilding competitions and has won the New York Pro consecutively from 2008 until 2010.

As a former gymnast, Michelle came into the sport of bodybuilding with a strong foundation, so her body responded well to lifting weights.

She competed in the 2011 Nationals, having only two previous competitions under her belt, but still managed to take the overall victory.

She made her professional debut at the IFBB Europa Battle of Champions in 2012, which she won, and placed eighth in her first Ms. Olympia in 2012.

While training in the off-season, Freitas gets up to around 150lbs, cutting down to 121lbs to do battle on stage.

Monique made her professional debut in 2011 and took 9th place at the Ms. Olympia the same year.

Bleck made her professional debut at the New York Pro in 2010, and some of her best wins include three Wings of Strength PBW Tampa Pro Championships.

Her most recent accomplishment was winning third place at the 2018 IFBB WOS Rising Phonix World Championships.

Slovenian professional bodybuilder, Brigita Brezovac, made her pro debut in bodybuilding in 2010, when she won the Tampa Pro and Europa Battle of Champions.

Brigita regularly placed within the top six at every Ms. International and Ms. Olympia she entered and is ranked 5th in the IFBB Pro Women’s rankings.

Her best win to date was being crowned the overall champion at the IFBB WOS Rising Phoenix World Championships in 2018.

Debi Laszewski is the third-best female bodybuilder in the women’s IFBB ranking list.

She started bodybuilding at 20 years old and competed in her first competition at the age of 24.

The American professional bodybuilder made her pro debut at the 2007 Europa Super Show and achieved second place at the 2012 Olympia, just behind Iris Kyle.

Yaxeni made her pro debut in the sport of bodybuilding in 1994 at the Jan Tana Classic.

She was crowned Ms. Olympia in 2005 and is the most successful Venezuelan bodybuilder ever due to being the only Venezuelan to win an Olympia title.

Kyle became a ten-time Ms. Olympia champion, claiming her first title in 2001, and is often referred to as the “Female Ronnie Coleman.”

She’s currently the most successful bodybuilder of all time, female or male, as she’s won ten Olympia titles, as well as several other prominent professional competitions.

We hope you enjoyed our list of the best female IFBB Pro competitors.

Female bodybuilding is certainly no joke.

Hats off to all the women on the list as they’ve managed to build physiques that most could only dream of, myself included!

The 15 Most Aesthetic Bodybuilders of All Time